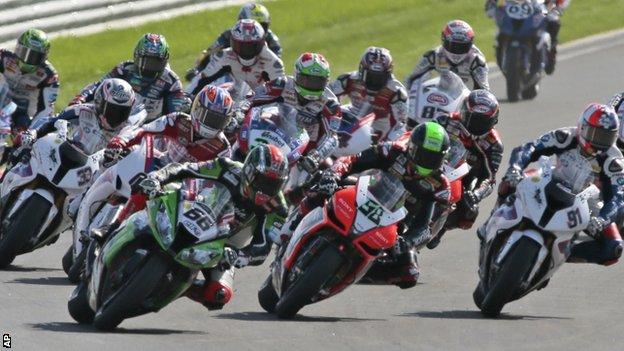 The organiser of MotoGP has agreed to take charge of running the World Superbike Championship.

Dorna, which organises MotoGP, and Infront, which is behind the World Superbike series, will now both be run as one group.

Carmelo Ezpeleta, CEO of Dorna, said: "We're excited to have the two top motorcycle series under one roof.

"We fully expect to develop and strengthen the distinct nature of both MotoGP and WSB as separate properties."

World Superbike racing sees riders compete on production-based motorcycles - bikes which are based on models available for anyone to purchase.

The move could see practical changes such as ensuring that the two series do not race on the same weekends, and hopes to ensure the future of both sports.

There are five British riders currently competing in the World Superbike championship:

Ezpeleta said: "We remain committed to working with teams and manufacturers, circuit owners, sponsors and broadcasters to give fans the best experience yet."

A statement said: "MotoGP and WorldSBK will be integrated within the Dorna Sports group but managed as separate events with a view to enhancing the two distinct championships.

"The objective is to allow both series to develop and enhance their championship personalities, retaining their leadership positions in the arena of world motorcycle road racing - WorldSBK, with its focus on production-based racing, and MotoGP with its focus on prototype racing."

Vito Ippolito, president of governing body the FIM, said: "I welcome the decision.

"We shall shortly meet to adapt the regulations to ensure the two championships have a distinct identity in future."