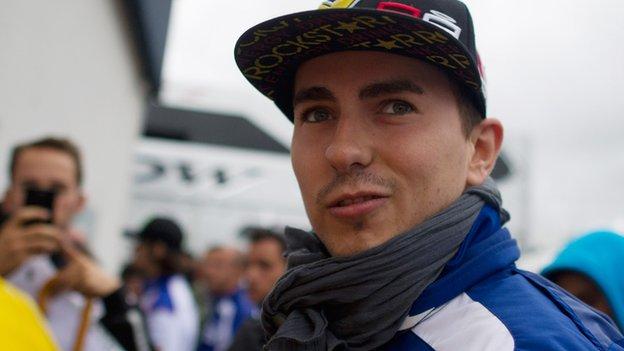 Title contenders Jorge Lorenzo and Dani Pedrosa were confined to the garage by rain in Friday's two practice sessions for the San Marino Grand Prix.

Only nine riders registered times in the first session with Danilo Petrucci fastest in one minute 43.178 seconds.

Karel Abraham was the best of 11 riders in the second session in 1:42.030, ahead of Britain's James Ellison.

Pedrosa is 13 points off Lorenzo at the top of the standings after successive victories in Indianapolis and Brno.

Their rivalry will resume tomorrow with more rain forecast for qualifying and drier conditions expected for Sunday's race at Misano.

Both are likely to prove more to the field's liking after damp conditions, combined with a lack of intermediate tyres in Moto GP, convinced most to wait out Friday's practice.

The outcome was a disappointment to fans who turned up at the circuit expecting to see all of the riders in action.

"Today turned out to be quite strange because in both sessions I just sat in the garage waiting for the track conditions to improve," said Britain's Cal Crutchlow, who rides for Tech3 Yamaha.

"It is disappointing for everybody concerned and I feel sorry for the fans here and the people watching on TV at home.

"When the track is damp like that it is very hard to learn anything, so I didn't even put my helmet on.

"It looks like the weather will improve for the rest of the weekend and I am looking forward to getting down to business tomorrow."

One rider who did choose to practice despite the conditions was Northern Ireland's Jonathan Rea, who is standing in for Casey Stoner at Honda as the Australian recovers from ankle surgery.

He finished fifth quickest, nearly three seconds off the pace.

The weekend will be a chance to remember Marco Simoncelli who died in a crash in Malaysia last year and lived in Cattolica less than five miles from the circuit.

The track has since been named after the Italian.