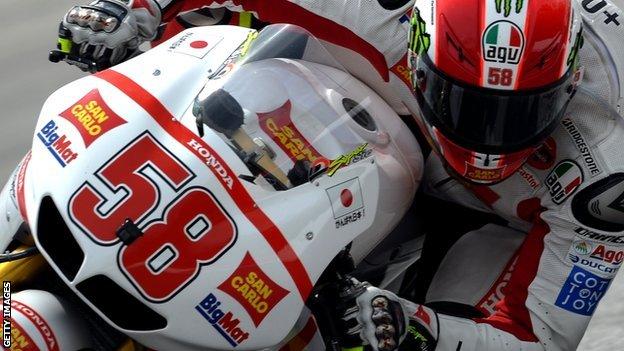 The Misano grand prix circuit in Italy has been renamed in honour of late Italian champion Marco Simoncelli.

Simoncelli was killed in a crash in Malaysia in October but lived less than five miles away from the circuit in his hometown of Cattolica.

Today is a very special day

The process of changing the name of the circuit began in November, and the track is now called the Misano World Circuit Marco Simoncelli.

Simoncelli won the 250cc World Championship with Gilera in 2008, and moved up to MotoGP with the Honda Gresini Team for the start of the 2010 season.

At Sepang on 23 October 2011 Simoncelli suffered a fatal collision with Colin Edwards and Valentino Rossi. The death of the 24-year-old shook the sport and many tributes were paid.

Speaking at the unveiling of the renamed circuit, Paolo Simoncelli continued: "I'm deeply touched in seeing the circuit of Misano named after Marco.

"We've received affection from all over the world in the recent months.

"I'm grateful to Santa Monica Spa, owners of the circuit, and to designer Aldo Drudi for having so nicely linked the name of Marco to the logo of the circuit."