Conor McGregor says long-term rival Khabib Nurmagomedov should be stripped of his UFC title as he warned the Russian was still in his sights.

The Irishman has courted a rematch with Nurmagomedov, who beat him in October 2018 but retired two years later.

Their grudge built to a crescendo after that bout with a melee involving both fighters and their teams.

"The world knows this war is not over," said McGregor before his fight on Sunday against American Dustin Poirier.

Sunday's clash takes place at Fight Island in Abu Dhabi, with commentary on BBC Radio 5 live and updates on the BBC Sport website.

"The title should be stripped and we should be engaging in a title fight. I predict a title strip," said McGregor.

Nurmagomedov bowed out of the sport after revealing he made a promise to his mother that his fight against Gaethje would be his last following the death of his father, coach and mentor Abdulmanap last July.

But UFC president Dana White last week said the Russian could be tempted to make a comeback if he sees "something spectacular" in the McGregor-Poirier fight, a rematch of their 2014 contest, which the Dubliner won.

"What I will say, as long as we fight again there will be no issue, that's it," McGregor added. "If he continues to run, then I'm not sure. We'll see what happens."

McGregor, who was last in action when he beat Donald Cerrone inside 40 seconds last January, has promised to deliver a "masterpiece" against Poirier in his first fight for 12 months.

The 32-year-olds meet in a rematch, this time at lightweight, which headlines UFC 257.

"This is the best I have ever been, for sure," said Irishman McGregor, who beat his American opponent when they faced each other at featherweight in 2014.

"I'm in some shape right now and I am coming to put on a masterpiece."

McGregor was a clear winner when he met Poirier in September 2014, knocking him out in under two minutes.

But at a good-natured news conference on Thursday, the Dubliner rowed back on earlier comments that he could finish Sunday's fight within 60 seconds.

"He's a hell of a competitor - I hope for a good long bout," said McGregor.

The former two-weight world champion announced his retirement in June, saying he was "bored with the game", but appears focused and determined again.

"I've put in an immense amount of work. I want to answer questions here," he said.

"It's going to be a good firework-fuelled bout." 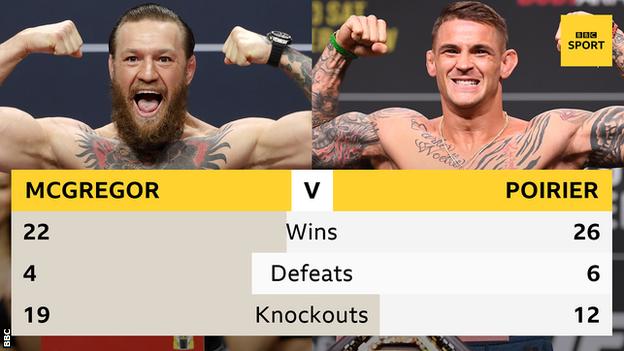 Organisers are expecting to have nearly 2,000 socially-distanced fans at the new 18,000-capacity Etihad Arena in Abu Dhabi.

"It's good that we are opening things up," said Poirier. "I'm excited to put on a show for these guys.

"Every fight is a chip on my shoulder. I'm trying to prove myself."

Poirier, who made his UFC debut in 2011, won a unanimous decision against Dan Hooker last June in a fight of the year contender.

Fight coverage on the BBC

And there will be updates between rounds from our man at the event, Nick Peet.

The BBC Sport website will have live text commentary, with updates, photos and analysis from 03:00.