Darren Till tops a card stacked with British fighters at London's O2 Arena on Saturday as the welterweight looks to recover from his UFC title loss.

Till, fighting for the first time since defeat by Tyron Woodley in September, faces American Jorge Masvidal.

Leon Edwards takes on Icelander Gunnar Nelson in the co-main event, while Nathaniel Wood fights in his home city for the first time in the UFC.

London will also host the first all-Welsh fight in the promotion's history. 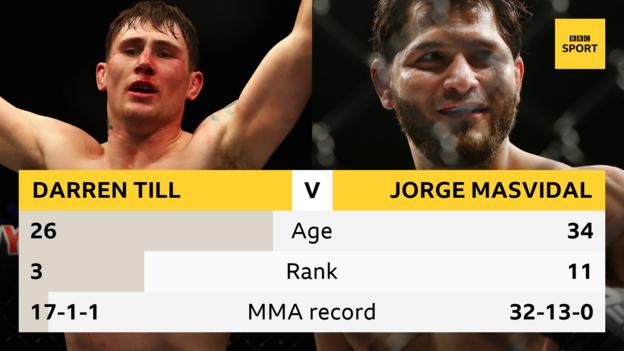 Till got the shot at the UFC title he was dreaming of last year when he faced Woodley at UFC 228 in Dallas, but the Liverpool fighter left Texas with the first loss of his UFC career.

Woodley has since had the belt taken off him by Nigeria's Kamaru Usman and Till, ranked number three in the division, will hope he can put himself in the frame for another crack at the championship by seeing off Masvidal in London.

"I want to go in there and put on an unbelievable performance," said Till. "My heart is pumping right now. I've got to bounce back."

Masvidal heads to the English capital on a two-fight losing streak, but says he loves "fighting in people's backyards" and will be looking to spoil Till's party.

"They are so well educated on fighting in England, they understand what fighting is," said Masvidal. "I want to make sure everyone gets their money's worth.

"It's fun to fight on somebody's home turf. Since I've been in this sport I have only tried to fight the best."

And he will have company.

Ben Askren, who will be a guest fighter in London, has been calling Till out over social media this week following a win over Robbie Lawler on his UFC debut.

At 34, Askren made his long-awaited entrance on the promotion earlier this month and is now ranked as the sixth best welterweight in the division.

"I don't care what he says about me," added Till. "A lot of people take it personally, but it's business." 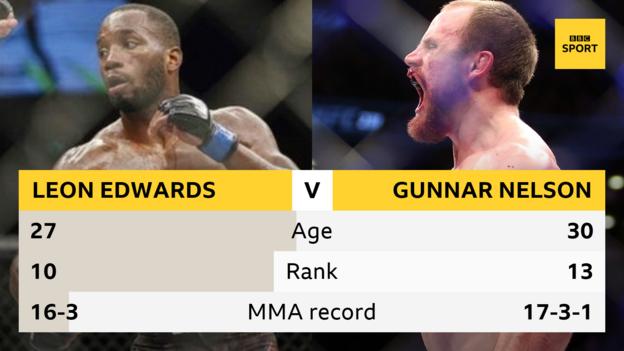 Birmingham fighter Edwards has admitted he would have loved to have topped the bill against Till in London, but the 27-year-old is also aware he faces a tough opponent in submission specialist Nelson in the co-main event.

Edwards is looking to increase his streak to seven wins against the Icelandic fighter, who has won eight of his 11 fights in the UFC.

You have to go back to December 2015 to find Jamaica-born Edwards' last defeat, against current welterweight champion Usman, with two of his six victories since then coming in London - including a knockout of Peter Sobotta last March.

Edwards is currently ranked as the 10th best welterweight in the division, three places higher than Nelson, and has said he hopes a win in London can help steer him towards another meeting with Usman by the end of the year.

Nelson, a team-mate of Irish star Conor McGregor, heads into the octagon on the back of a submission win against Brazil's Alex Oliveira at UFC 231 in December.

Their bout will be preceded by a battle of two of the top-10 light-heavyweights, as Switzerland's Volkan Oezdemir takes on American Dominick Reyes.

Wood's homecoming & the Battle of Wales

Londoner Wood has been calling for a spot on this card since his UFC debut last June, when he beat Johnny Eduardo with a second-round submission to earn the performance of the night bonus in New York.

He then spent Christmas in California preparing for his second fight on the promotion - and second win - against American Andre Ewell at UFC 232.

Now the 25-year-old bantamweight, dubbed 'The Prospect', gets to showcase his talents in front of a home crowd at London's O2 Arena.

Former Cage Warriors champion Wood will face 28-year-old Mexican Jose Quinonez, who has four wins under his belt after losing on his UFC debut in 2014.

Saturday will also see two Welsh fighters facing each other inside the UFC octagon for the first time, as Jack Marshman takes on John Phillips.

Abertillery's Marshman has two wins from his five UFC fights, with the 29-year-old most recently losing to Karl Roberson in New York.

"It was a fight that made sense," said Marshman. "It needed to happen and I am good to go. He'll have a decent crowd and I know I've got a massive crowd coming."

When John Phillips began his UFC career he took to sleeping in a camper van outside his gym in Dublin, where he is trained by McGregor's coach John Kavanagh.

The 31-year-old will be looking for his first victory on mixed martial arts' top promotion after losing his opening two bouts by submission.

"It's the unofficial title of Wales," said Phillips. "I won't celebrating beating Jack.

"He's a Welshman and it's bad circumstances, whoever loses is probably going out of the UFC. I like Jack, I like his team. Unfortunately it's him or me.

"This is the fight everyone wants to see - the last person in Wales better turn the lights off!"

Meanwhile, Till won't be the only Liverpudlian in the octagon on Saturday as Molly McCann looks to bounce back from defeat on her UFC debut.

Till might have been vocal in his dream to one day fight at Liverpool's Anfield stadium, but Everton fan McCann says she has eyes on showcasing her skills across Stanley Park at Goodison Park in the future.

'Meatball', who lost to Gillian Robertson on her debut in May, faces Brazilian former professional volleyball player Priscila Cachoeira.

Till's friend and team-mate Mike Grundy is set to make his debut in the promotion against fellow Englishman Nad Narimani.

The 32-year-old featherweight, who won a wrestling bronze medal at the 2014 Commonwealth Games in Glasgow, already knows what it is like to walk out on fight night in the UFC, having previously been in Till's corner.