Flyweight MMA fighter Molly 'Meatball' McCann will compete against Priscila Cachoeira at UFC London this Saturday in the O2 Arena.

Her pre-fight training camp will consist of the customary blood, sweat and tears - so I decided to train with Molly for a day of her programme.

Putting together Molly's gruelling workout regime has been Dr Carl Langan-Evans, a sports science specialist at Liverpool John Moores University who has been guiding Molly's fitness regime step by step in her preparations for the fight.

Running and sparring followed by a high-intensity strength and conditioning session in the evening is what's on the menu on an average day with Molly.

How about me (described by Molly as "your average human being")? Well I go to the gym two or three times a week and play football whenever I can, so training like this was guaranteed to push me to my limits. 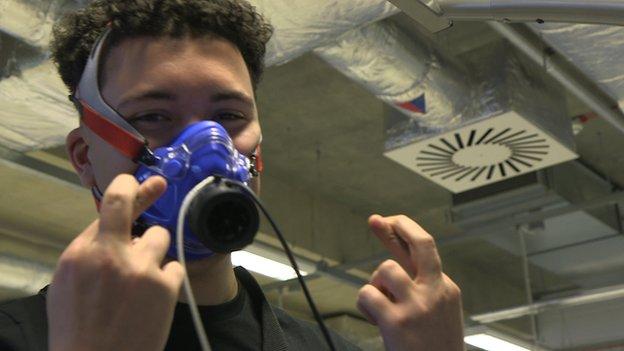 Even at the best of times, I hate running, but this... this was something else.

Sprint tests show what speed Molly should be running at to convert her body fat and use it as a fuel, which is key to her making her desired weight. The test works in intervals, starting at a low speed and incline before increasing as each interval passes.

Once the top speed is reached, the treadmill rises to full incline and it's at this point where it feels like you're running up Mount Everest.

So looking like Bane with my facemask attached, I began the test. I hopped onto the treadmill and even though it was apparent early on that I wouldn't be running at maximum speed and incline for anywhere near 25 minutes, I still managed to last a solid five minutes.

Off the treadmill and into the weights room, and the first exercise we started with was pull-ups. Three sets, six reps, and to make matters harder, each set had a different grip.

I watched as Molly effortlessly managed to complete six pull-ups, hop down, look at me and say: "It's your turn now soft lad." Precisely the words of encouragement I needed, especially considering my pull-up game is very, very weak.

However, my first attempt was amazing. I jumped off the bar and was ready for the second set, but I was a fool to think I could follow up with anything close to my first try.

Three sets later and my arms feeling like jelly, we loaded up the squat rack. A usual 'leg day' session for me ends with 95kg squats. Molly's however, started with 95kg.

Five reps of squats would be followed by jumping over mini hurdles to make the exercise a super set. The squats and jumping weren't too bad for me as it's one of my favourite exercises in the gym and I'd managed to restore some credibility after my dreadful pull-ups.

Next up was the bench press at 60kg, followed by medicine ball throws.

Molly took me through her first set of throws and told me how it helped with the explosiveness of punches. By this time, my arms were getting more and more fatigued, but I managed to power through, even though my throws were unrecognisable compared to Molly's.

Following this was Romanian deadlifts, and at this point, it was hard ignore the doubts in my mind whether I would make it to the end of the day in one piece or not, but I had to keep going.

We were throwing up 65kg on the deadlifts, with each set preceded by eight reps of a dumbbell shoulder press.

Molly wasn't even breaking a sweat during her lifts, whereas I was pretty sure my hamstring was hanging on by a thread.

To close off the session, it was barbell hip thrusts at 100kg, followed by dumbbell rows for eight reps on each arm.

The gym work was seriously testing but it marked two-thirds of the day complete and set me up well for the final session of the day at Molly's MMA gym in across the road Liverpool.

Tired, exhausted, hungry and in pain… what could go wrong? 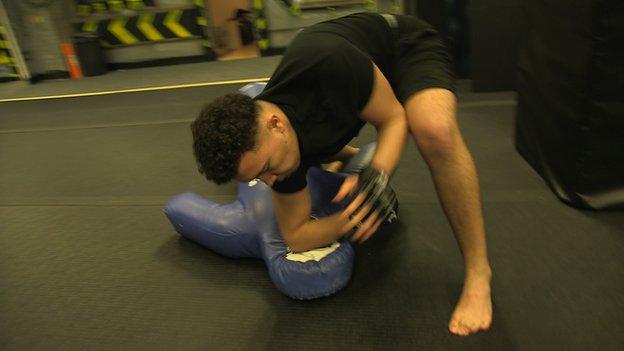 A championship bout in the UFC consists of five rounds, but a non-title fight is usually three. Each round lasts for five minutes, with judges awarding points for the amount of strikes you land on your opponent. However, if your opponent taps out to a submission hold, gets knocked out, or the referee calls a technical knockout, the bout will end.

That's not always the case though and fighters have to be prepared to go the full duration in the octagon, where it's just you and someone whose main goal is to beat you to a pulp.

So, we had a go at trying to replicate that in the best way possible... against a training dummy. Let's be honest, there was no way on earth I was about to trade blows with a fully trained, professional UFC fighter.

In addition to the pad work, takedowns and ground and pounds, Molly would unexpectedly shout "sprawl!" This is where a fighter quickly throws themselves onto all fours to protect against an incoming takedown.

The sparring session took place 40 minutes after I'd eaten my lunch with Molly - my tuna crunch sandwich clearly possessing the same energy and nutrients as her protein pancakes and fruit.

Not that it mattered anyway. Six minutes into the sparring session, that very sandwich nearly made a return all over the gym floor whilst I was battling with myself not to throw it up. 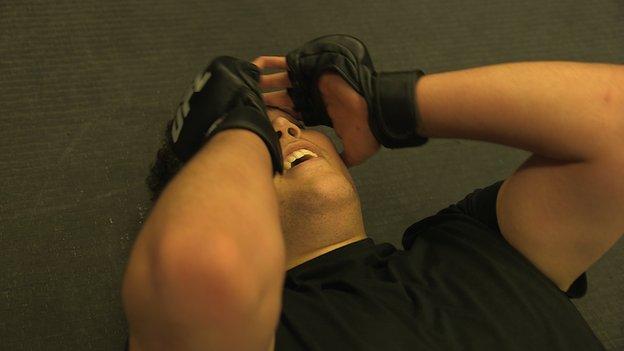 "Sprawl, takedown, ground and pound, quick get up lad, keep that guard up or I'm going to kick you," Molly would shout. She was determined to make this hurt.

After three ruthless rounds, my epic encounter against the dummy whose face I genuinely grew to hate came to its grand finish. My legs had given up on me and I could barley stand, much like in the running tests earlier in the day.

It may not have been the most technically gifted performance from an amateur, but as far as lasting three rounds, I'd finally got the better of that stupid blue training dummy. 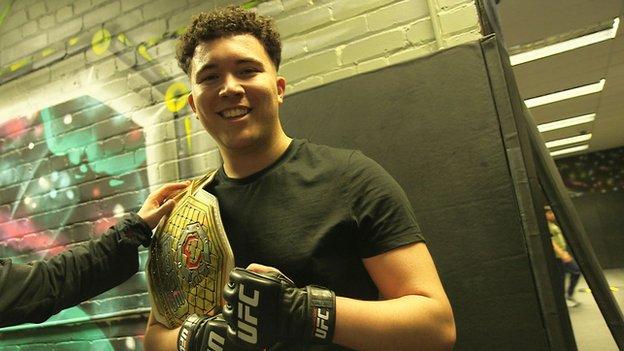 I don't think my legs returned to full capacity until at least three days after, so for anyone who watches on MMA on TV and thinks they can have a good run at it, be prepared to take on one of the toughest sports out there.