Defeats by Dundee Stars on Friday and Cardiff Devils on Sunday mean Clan ahve slipped to fourth as their end-of-season slump in form continues.

Fife Flyers remain on target to clinch a top-eight finish after winning one of their two games on the road.

The Stars did their hopes some good with four points from six away from home, but other results perhaps diluted the joy overall.

Defeat could be 'biggest lesson'

A 5-1 reverse at home to Dundee, followed by a 2-0 defeat in Cardiff, means Clan have lost seven of their last eight games.

"Friday was certainly an off night," Russell said. "We were terrible and it was the worst game of the year.

"It wasn't a setback and might just be the biggest lesson for us going forward."

The Glasgow coach was much more pleased with the game in Wales, despite another defeat.

"I thought we played a really good game," he said. "The second game was a lot more like us, which was a positive.

"We've got four games left - Cardiff, Nottingham and two against Fife - and, if we can play like we did in Cardiff, we've definitely got a chance."

First-period goals from Lukas Lundvald, Matt Marquardt and Matt Bissonnette gave Stars a significant cushion at Braehead, with Lundvald getting his second and Dundee's fourth after the break.

Brendan Connolly pulled one back for Clan, but Lundvald completed a hat-trick in the third period to complete a great win.

In Cardiff, goals from Sean Bentivoglio and Stephen Dixon made the difference as Clan were shutout for the second time against the title-chasing hosts.

Dundee had two tricky trips, away to Guildford Flames on Saturday and Nottingham Panthers on Sunday, in quick succession after their win in Glasgow.

Stars let a 2-1 lead, courtesy of goals from Fabrizio Ricci and Johan Andersson, slip as they lost 3-2 in Guildford.

Sunday was much better as Omar Pacha's side took a 2-1 overtime win, with Mike Sullivan and Bissonnette scoring.

However, they lost 4-1 away to Coventry Blaze on Sunday, with Basara getting their only goal.

Statistics of the week

Flyers got into the Red Nose Day spirit at the weekend: 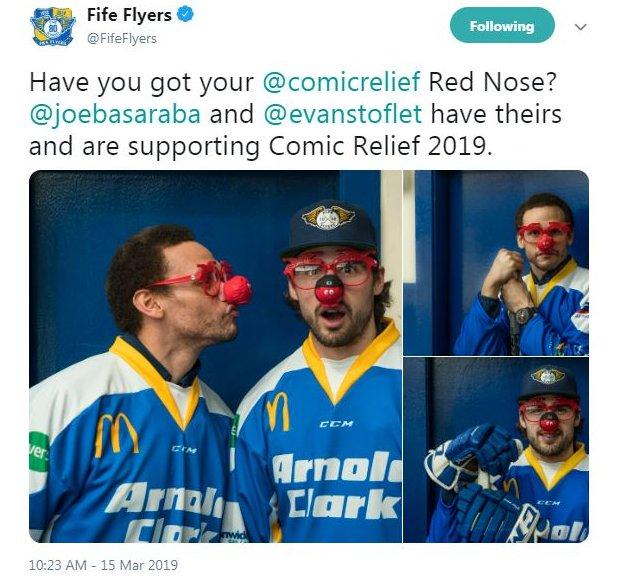 "I'm jealous, but I was honoured to be part of this organisation when I was here and what they done" - former Braehead Clan forward Stefan Meyer enjoyed his return to see his old club after being inducted on to the Wall of Fame on Friday. 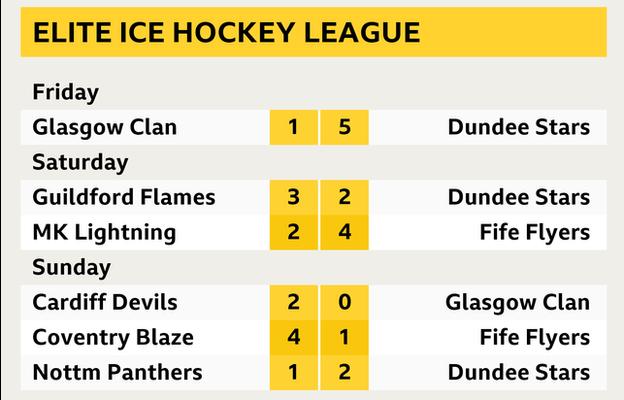