Fife Flyers coach Todd Dutiaume sympathises with the fans after they lost both games at the weekend.

Defeats to Coventry Blaze and Dundee Stars have dragged them into the scrap for the play-offs.

Elsewhere, Omar Pacha made an unexpected playing return for Stars.

And Glasgow Clan left title challengers Belfast Giants stunned with a 5-0 win to get the last laugh in a trilogy that saw Giants win in their Challenge Cup meeting and in the league.

It was another one of those weeks for Fife where they started well in both games, but just couldn't maintain it as they slumped to defeats again.

Since starting 2019 with two victories, they've won only four of their last 12 and Dutiaume, falling to seventh in the table.

"The problem that's plagued this team is they've had a hard time putting 60 minutes together and it's apparent for every one to see," he said.

"We can be formidable when we play, but if we're only doing that for 10 minutes then sporadically for the rest of the game, you're always going to be chasing.

"I made a passionate defence of this team earlier in the season as they'd been getting a hard time, but I feel for our fans.

"They come out in big numbers and they want a team that works hard and that's something we haven't done for large portions of the year as we look back with regret I'm assuming."

Glasgow Clan's week began by finally clinching the Gardiner Conference title on Tuesday with a 5-1 win over Dundee Stars, but were knocked out of the Challenge Cup by Belfast Giants two days later.

On Saturday, Darcy Murphy's powerplay goal in the opening period set the tone as they took the game - and the league points - with a 4-1 win.

But the following day when they took Giants back to Scotland - although tired and weary - Clan felled the Giants with a 5-0 whitewash as goalie Joel Rumpel recorded a third blank.

It ended a gruelling week for Pete Russell's team, who now have four tough trips to come to round off the month of February.

"Maybe they should play tired every week" - Glasgow Clan coach Pete Russell thinks he could be on to something after Clan rounded off a run of four games in six days with a thumping 5-0 win over Belfast Giants. 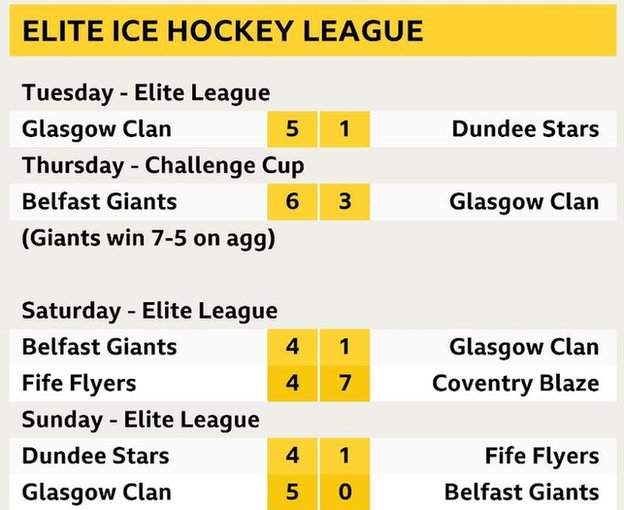