Pete Russell's team had the better of the weekend, taking three points from four after suffering an embarrassing loss to the team who were bottom of the table through the week.

Fife Flyers picked up just one point, while Dundee Stars now find themselves holding up the rest of the Elite League table.

It was something of a mixed week for Russell and his team and they recovered well after their 6-1 thrashing at his old team, Lightning.

And Gratton looked at the positive in the end as they got their own back, winning 6-3 over MK on Saturday after narrowly going down 5-4 in overtime against Sheffield Steelers on Friday.

"It was a bounce back game after what was a tough pill to swallow on Friday, but it's nice to end it on a winning note," Gratton said.

"We finished the run of five games in eight days with seven points. We could have had more, but we have to be happy with that and it's made us stronger as a team.

"The game on Wednesday was a one-off and we took it as a lesson so it was especially pleasing to take three points from four at the weekend.

"Getting two goals, it's always nice to chip in and help the team out, but more importantly, we got the win and that's what it's about."

Matt Stanisz got the only goal in Milton Keynes on Wednesday, but there was no time to feel sorry for themselves when Sheffield came to Glasgow.

Clan did everything right in the first half when two from Matt Beca and one each from Stanisz and Gerard Hanson gave them a four-goal lead.

Steelers clawed their way back into the game and were level by the end of regulation time as Ben O'Connor, Josh Pitt, Stefan Della Rovere and Ryan Martinelli all scored.

Mark Matheson's overtime winner killed the Clan off in heartbreaking fashion as the home team rued what might have been.

Against Milton Keynes on Saturday, Beca put the home side in front, but Michael Fine levelled for Lightning before Scott Pitt, Travis Ehrhardt, a second from Beca and Gratton's first put them 5-1 in front.

Lightning got a lifeline with two quick goals from Georgs Golovkons and Fine, but Gratton's second settled things late on to restore that winning feeling in the west of Scotland.

Fife Flyers may have got only one point from the weekend, but it edged them a little closer to Belfast Giants at the top of the table, with the Giants in Continental Cup action all weekend.

They were beaten 6-2 by Sheffield Steelers at home in an unusually lacklustre performance, with Paul Crowder and Mike Cazzola on target for the Flyers.

But they got their point by taking Nottingham Panthers all the way to penalty shots, eventually losing 3-2, despite strikes from Danick Gauthier and Joe Basaraba

Dundee Stars plunged to the bottom after two more losses, adding to coach Omar Pacha's frustrations as they continue to struggle.

They started at Coventry Blaze on Sunday and although Francois Bouchard and Matt Marquardt were on target, but Stars went down 5-2 at the Skydome.

Returning home on Sunday, Cardiff Devils were waiting for them and although the Stars were level at 3-3 after two periods, the Welsh side forged ahead to take the 6-3 win.

"I personally apologise for our performance and our poor discipline." - Glasgow Clan coach Pete Russell made his feelings clear after Wednesday's shock 6-1 loss at MK Lightning

Fife Flyers' Carlo Finucci is clearly used to answer the same questions from the media... 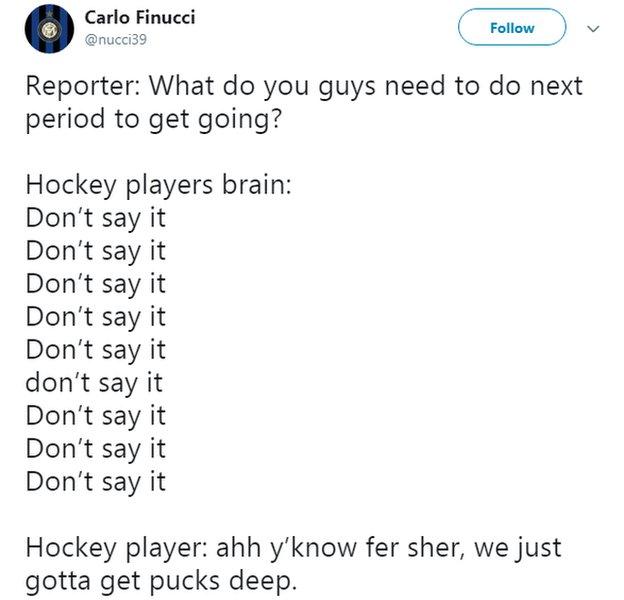 Find out how to get into ice hockey