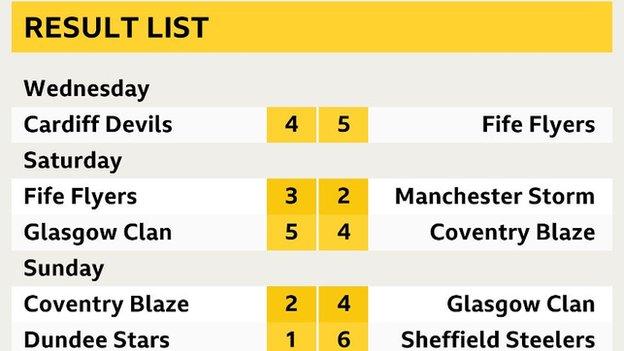 Dundee Stars coach Omar Pacha is ready to wield the axe after describing his side's 6-1 defeat to Sheffield Steelers as "embarrassing".

Bonfire night may have come and gone, but there were fireworks in Dundee as the Stars put in a sorry display in the rout.

Glasgow Clan and Fife Flyers both hit winning form in a weekend that had some eyebrow raising results.

But on Tayside, the weekend saw the mood take something of a dark turn.

Dundee Stars have only one win in 13 games to show for their efforts and coach Pacha is fed up as his team have only Milton Keynes Lightning between them and the bottom of the table.

And he slammed his men after Sunday's loss, saying their third period display was the worst he's ever seen as a coach.

"We always talk about how we start the game and we basically gave them three goals," he said.

"We had chances in the second period, but weren't finishing them. As for the third period, it's probably the most embarrassing I've ever seen as a coach.

"We knew it would be a tough league this year, but we're 16 games in and while the guys have showed good things, we have to start to reconsider everything.

"All I can do on behalf of the organisation is apologise. It's unacceptable and something will happen. If the guys are not ready or up to the challenge, then someone else will be."

It was hard-hitting words from a coach on the edge in a game where they simply capitulated against a team who themselves were in crisis some weeks ago.

Shawn Boutin's first period equaliser for the Stars after Josh Pitt's opener was the rare highlight in a night to forget.

From there, Steelers hit their stride as Robert Dowd and Jonathan Phillips put them 3-1 up after the first period.

Tanner Eberle in the second session followed by further markers by Ben O'Connor and Ryan Martinelli secured a comfortable win for Sheffield.

Fife Flyers kept up their pursuit of top spot in the Elite League with two wins, starting with an impressive 5-4 overtime win at champions Cardiff Devils.

They kept their run going with a 3-2 home win over Manchester Storm on Saturday.

Bari McKenzie, Evan Bloodoff and Mike Cazzola were on target as Fife ended the weekend in second place, four points behind the on-song Belfast Giants.

Glasgow Clan also picked up maximum points in their two meetings over Coventry Blaze, starting with a 5-4 overtime success at home where Matt Beca struck the deciding goal.

Both sides met again on Sunday at the Skydome and although Alex Nikiforuk put Blaze ahead, Clan hit back with four unanswered goals to clinch a 4-2 result.

It was Glasgow's first away game in four weeks as they moved up to seventh in the standings before they head to bottom of the table Milton Keynes Lightning on Wednesday.

"This team are starting to believe they're a good team and capable of good things," Fife Flyers coach Todd Dutiaume is optimistic of what his side could do as they continue to hang around at the top of the table.