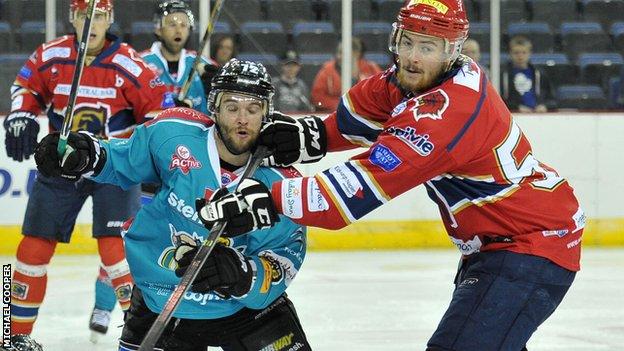 Colin Shields and Kevin Saurette were the other scorers in a fixture which doubled up as both an Elite League and Challenge Cup tie.

Edinburgh hit back to equalise on two occasions through Dennis Rix and Jade Portwood.

But Belfast then pulled away to record an emphatic margin of victory.

There was added spice to this encounter before the puck was even dropped.

A fiery clash last Sunday between the sides saw Capitals player Riley Emmerson banned by the Elite League for 10 games for a hit on the Kevin Phillips of the Giants.

Edinburgh had been unable to supply video footage of the incident but the League's sanction was, nevertheless, severe.

Belfast edged ahead eight minutes into the first period when Shields slammed the puck home from close range.

Despite a phase of Giants dominance, parity was restored seven minutes with a goal for the visitors from Rix.

Former Dallas Star Sawada then fired Belfast back in front on a powerplay with a tremendous angled shot straight out of the NHL with two minutes to go in the opening period.

The Capitals made it 2-2 five minutes into the second period when, shorthanded, they were awarded a penalty shot, converted past Stephen Murphy by Portwood.

Cheverie then made it 3-2 with a clever close-range finish before a Saurette strike established a two-goal lead for the Giants for the first time in the game going into the final period.

Cheverie and Sawada doubled their personal tallies in the final 20 minutes, before Peacock made it 7-2, firing into the top-left corner for the shorthanded Giants. He then grabbed a brace of his own before the end.

In view of the bad blood from the previous game, there was very little by way of physical incidents, as the Giants were happy to just rack up the goals and secure two points.