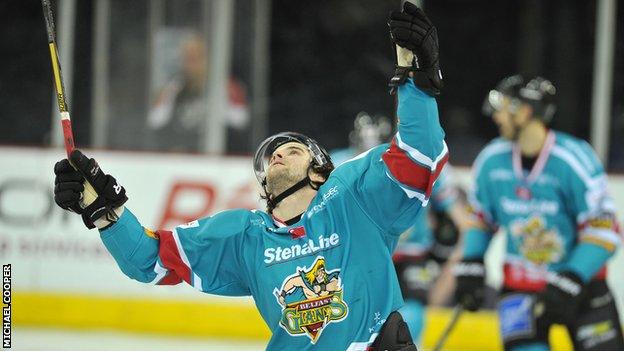 Belfast Giants maintained their seven-point lead at the top of the Elite League as they earned a 4-2 win over Dundee Stars on Sunday night.

The victory concluded an impressive weekend for the Giants after Saturday's 5-1 home victory over Coventry Blaze.

Dustin Whitecotton put the Giants ahead in Dundee but two Billy Bagron goals then gave the home side the lead.

Whitecotton gave Belfast the lead with only eight seconds remaining in the first period with a powerplay goal.

Bagron levelled the contest only 18 seconds after the restart and then put Dundee ahead with another goal in the seventh minute of the second period.

However, the Giants were ahead again by the close of the second period after powerplay efforts from Szwez and Elfring.

Shields completed the scoring with just over seven minutes remaining.

On Saturday, Chris Higgins's early Belfast goal was cancelled out by a Ryan Ginand effort but Szwez's strike put the Giants 2-1 up after the first period.

With second-placed Braehead Clan winning 4-2 in Coventry on Sunday night, the Giants remain seven points ahead at the top.