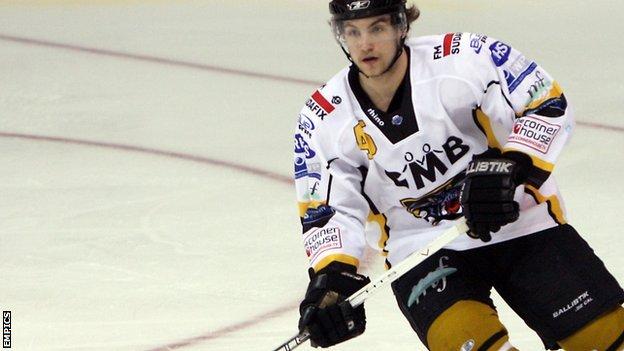 Lee, 23, was named defenceman of the tournament after the team's run in one of European hockey's most prestigious competitions ended at the semi-final stage in Italy.

We have done our organisation very proud.

"He keeps getting better and better. I'm so happy with how he's blossomed.

"He is an exceptional young player and we are lucky to have him," Neilson told BBC Radio Nottingham.

"I remember the young days when he was doing the basic work with Lacho [Robert Lachowicz] and Nortsy [Tom Norton]."

Going into their final group game against Asiago, Panthers were still in contention for a place in the semi-finals and a chance to progress to January's Super Final in France, having recovered from an opening 4-3 loss to Russian champions Toros Neftekamsk on Friday to beat Yertis Pavlador 2-1 the following day.

However, Sunday's 3-2 defeat by Asiago left Nottingham third in their group behind the Italian hosts and Kazakhstan champions Pavlodar.

"That [loss to Asiago] is one of the best performances I've seen in an awful long time," Neilson said.

"The guys competed extremely hard, their desperation levels were though the roof and I thought we deserved a little bit more.

"With the tempo they played at, the physical nature they played with, I thought we might be able to edge them out in the third period. We have done our organisation very proud."