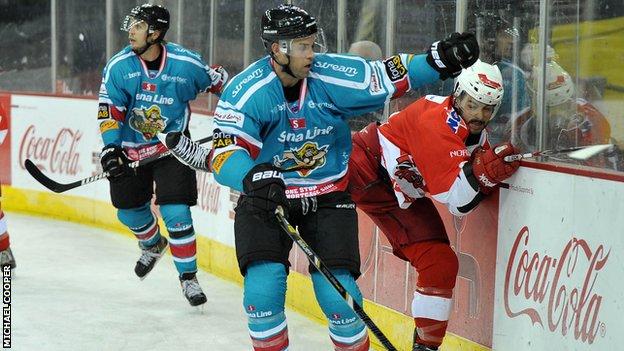 Belfast Giants completed back-to-back weekend away wins over Coventry as they beat the Blaze on penalty shots after Sunday's clash had finished 2-2.

Evan Cheverie put the Elite League leaders ahead in the first period but Kevin Harvey and Michael Henrich replied to put the home team ahead.

With no goals in over-time, Craig Peacock scored his penalty with Stephen Murphy saving the opening Blaze stroke.

Belfast had extended their Elite League lead to four points by edging out Coventry 3-2 in Saturday's clash at the SkyDome Arena.

Goals from Dustin Whitecotton and Colin Shields put Belfast 2-0 up by the end of the first period.

James Griffin replied for Coventry in the second period before Brian McMillin levelled early in the final period.

With second-placed Dundee losing 4-1 in Sheffield, Saturday's win extended Belfast's advantage at the top of the table.