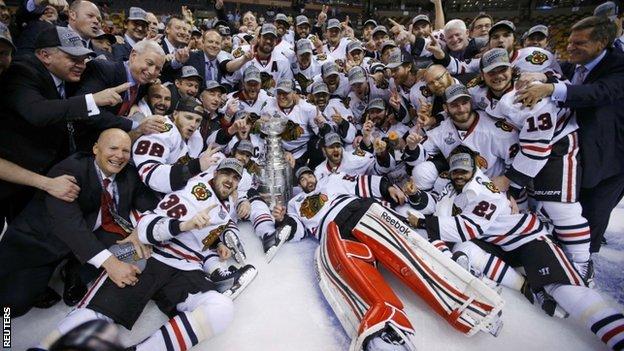 The Chicago Blackhawks are NHL champions for the second time in four years after a dramatic 3-2 Stanley Cup victory over the Boston Bruins.

The series looked to be heading for a deciding Game 7 as Boston led 2-1 with 76 seconds left on the clock.

But Bryan Bickell and Dave Bolland scored just 17 seconds apart to seal a stunning comeback for the Blackhawks.

Victory gave Chicago an unassailable 4-2 lead in the best-of-seven series and their fifth overall title.

It was the Blackhawks' third consecutive win in the series and ended a season which began with them setting an NHL record by scoring at least one point in their first 24 games.

"I think there's something about our core," said Patrick Kane, who was awarded the Conn Smythe Trophy as the most valuable player of the play-offs.

"Hopefully we can stay together a long time, because that's two Cups in four years, and we seem to only be getting better and better as players as time goes on here.

"It's unbelievable to be in this situation."

Boston, who had led the series 2-1, were 1-0 ahead after the first period in the fourth game following Chris Kelly's opener at TD Garden.

Jonathan Toews levelled things up and though Milan Lucic put Boston ahead in the third period, the 2011 champions were beaten as Bickell and Bolland turned it around.