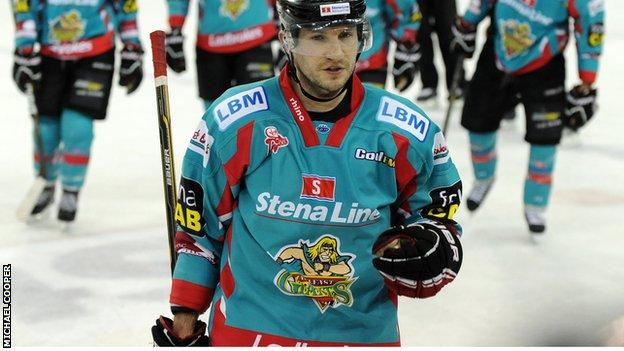 Belfast Giants progressed to the play-offs finals weekend as they completed a 7-4 aggregate victory over Edinburgh.

The Giants were 3-1 up after Saturday's home leg but Edinburgh cut the margin to a single goal as Brent Patry notched the only first-period strike on Sunday.

However, the Giants took control of the tie again as Noah Clarke and Kevin Saurette scored in the second period.

The other Edinburgh goalscorers at Murrayfield Ice Rink were Marcis Zembergs and Michal Dobron.

Saurette's match-winning goal was an empty-net strike 33 seconds from time after Edinburgh had gone for broke by taking off keeper Tomas Hiadlovsky.

In Saturday's first leg at the Odyssey Arena, Peter Holecko scored a powerplay goal to put Edinburgh ahead after a goal-less opening period.

Craig Peacock levelled and then Daymen Rycroft and David Phillips found the net in the third period.

The Giants are hoping to secure the play-off title to make up for the loss of their Elite League crown to Nottingham Panthers.