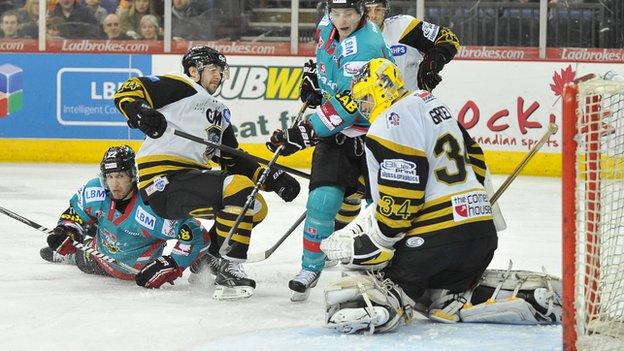 The Belfast Giants gained instant revenge over champions Nottingham Panthers in the second game of the Elite League double header.

The Panthers had sealed their first league title for 57 years by winning 5-3 at the Odyssey Arena on Friday.

Andrew Fournier and Robby Sandrock put Belfast 2-0 up after the first period while Nottingham's Bruce Graham netted the only score of the second.

Daymen Rycroft and Sandrock then extended the Giants' lead.

David Ling pulled one back for the visitors with Kevin Saurette's powerplay goal completing the scoring on 12:46 in the third period.

Belfast's last two games of the regular league season are away to Coventry Blaze on 23 March and Sheffield Steelers the following night.

It might have been a defeat for Nottingham on Saturday, but their large travelling support will not be too worried as they had witnessed that title-clinching victory the previous night.