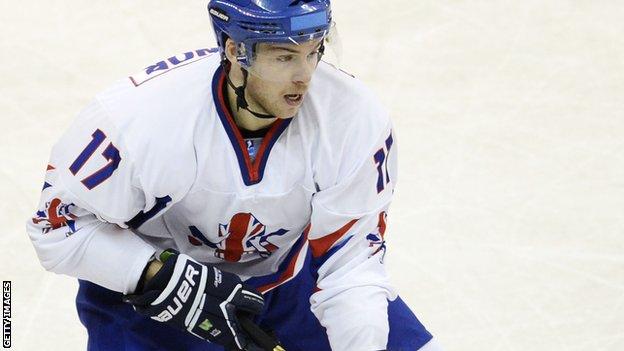 Great Britain have failed to qualify for the 2014 Sochi Winter Olympics after losing 4-2 to France.

After defeat to hosts Latvia, GB had to win their final two matches to have a chance of topping their group.

"I'm really proud of the way we played today. This GB programme is going places. The young guys are coming of age. To see Farmer and Lachowisz come on is tremendous.

"You can't fault any single player, they all played well and hard.

"By the time the world rankings come out again, after the world championships, they'll be ranked higher. The dream may be over but we have a lot to look forward to."

After a surprise 3-2 defeat to Kazakhstan in their first match the French will now take on Latvia on Sunday with the winner likely to secure their place at next year's Games.

Craig Peacock and Robert Lachowicz were the British scorers and Hand believes they can be proud with their efforts.

"We battled hard, applied lots of pressure and scored some nice goals," he said.

"It obviously would have been nice to go all the way but we knew it would be very tough and we now have to take the next steps as an ice hockey nation."

British Ice Hockey are the first of the GB winter sports to learn of their Sochi Olympic fate, with athlete berths for other sports not due to be decided until closer to the 2014 Games.

The British ice hockey team, who won gold at the 1936 Winter Games, have not qualified for an Olympics since 1948 and their next campaign is likely to begin in earnest in late 2016.

Great Britain's last match in Riga, Latvia will be against the Kazakhs on Sunday at 1100 GMT.