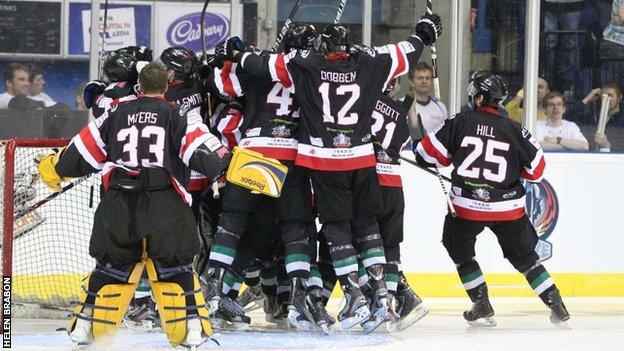 Nottingham Panthers set up a mouth-watering Elite League play-off final against Cardiff Devils with a crushing 10-3 win over Hull Stingrays.

Cardiff Devils have reached the play-off final in each off their last three seasons and have qualified for every play-off weekend.

Smith was the only player to score in the shoot-out after a sensational first semi-final.

Devils led inside three minutes when Scott Matzka skated through on a two-on-one and calmly used his team-mate as a decoy before expertly finishing.

Matzka could have then made it 2-0 after an incisive attack but slapped his effort wide.

But Elite League winners Belfast had started brightly and recovered quickly. They dominated possession in the first period and only a wonderful double block from Devils netminder Stevie Lyle prevented them from drawing level.

Giants did equalise when they made the most of a powerplay. Cardiff managed to survive 30 seconds of a five-on-three, but just as Josh Batch was returning to the ice to take them back up to four, Jeremy Rebek's cool low finish into the corner from Jeff Mason's assist made it 1-1.

Cardiff's tactics of looking for the killer pass on the counter-attack continued until the end of the first session, and although Belfast created more openings, Devils arguably had the better chances.

"Cardiff played really well tactically. They were well organised and made it tough for Belfast and will have to do the same thing against Nottingham. I don't think they will change their gameplan. They will sit back and wait for their chances."

But the scores remained level and the Welsh side began the second period more aggressively, putting more pressure on the Giants and matching them for opportunities.

Belfast goalie Stephen Murphy was forced into several fine blocks, but Lyle also had to be alert to make another superb double save.

Cardiff regained the lead when Scott Dobben netted from a tight angle after being teed up by the excellent Matzka.

Jeff Pierce was denied a third for the Welsh side on the powerplay when he shot straight at Lyle and a Mark Smith effort almost deflected in as Devils looked to give themselves some breathing space.

The game became increasingly open in an enthralling final period and, as the chances flowed, both goalies demonstrated their quality.

Devils arguably had the best openings, the clearest falling to Matzka, who was denied when on-on-one with Murphy when the Devils were two men down on the powerplay.

It did not seem costly as Luke Piggott shot home after a spell of Cardiff pressure to establish a two-goal advantage with less than nine minutes to play.

However, Aaron Clarke set the Cardiff nerves jangling in the final five with a simple back-post finish and Mike Hoffman bundled the puck in to make it three apiece from on the goalline after an almighty scramble.

Belfast were now rampant and almost won it on the buzzer when Lyle denied Hoffman from in front of the goal.

Nottingham, the reigning play-off champions and Challenge Cup winners for a third time in three seasons, never looked in any danger of suffering a huge upset at the hands of a Stingrays side that they had beaten in all seven of their previous meetings this season.

Clarke set Panthers on the way in a first period they completely dominated when he fired high into the net from the left.

Corey Neilson, Rhett Gordon and the ever dangerous Clarke all went close to extending that lead.

However Panthers, looking at ease and brimming with confidence in their home rink, had to wait until the second period before their relentless pressure was rewarded.

But when the first goal came within two minutes of the restart, they ran riot.

Marc Levers smashed a glorious second into the top corner after great work by Matt Francis and Brandon Benedict.

And moments later, with just over two minutes played, Sami Ryhanen made it 3-0 when he reacted smartly to flick past the overworked Christian Boucher.

Hull, playing in their first play-off weekend after stunning Sheffield Steelers in the quarter-finals, gave themselves a glimmer of hope when Jason Silverthorn smashed the puck past Craig Kowalski after a swift break and fine pass across the face of goal from Derek Campbell.

But Clarke added a fourth just after the halfway mark of the game, slapping another fine shot high into the net - his 41st goal of another prolific season.

Rhett Gordon made it 5-1 with just under eight minutes of the second period remaining with a cheeky flicked finish after teasing and tormenting Boucher.

"Panthers were too strong for Hull and you could see that right from the start of the game. The quality and depth of their line-up was too much for Hull. For them to get here was an outstanding achievement but playing the Panthers at home was a tough ask."

Stingrays gave their travelling fans in a packed arena something to cheer when Campbell turned the puck home into a half-guarded net to make it 6-2.

But Clarke instantly replied to complete his treble with another effort that flew high into the net.

David Alexandre-Beauregard added an eighth goal and Rob Lachowicz grabbed a simple ninth for Panthers, who, with Sunday's final in mind, were able to rest some of their star names in the closing stages.

And with Panthers fans demanding a 10th goal, Jordan Fox duly obliged but Hull did at least grab the final goal of a breathless game when Sylvain Cloutier notched from close in.

You can hear coverage of Sunday's Elite League play-off final on the BBC Sport website from 1600 BST.