Record-breaking mare Enable has been retired from racing.

"Obviously I shed a tear as I was a bit emotional. She has touched my heart and has been one of the great mares of our generation," said Dettori, 49.

"I went to see her this morning. I accept the decision and she doesn't owe anyone anything."

Meanwhile, leading Irish trainer John Oxx - who saddled the brilliant Sea The Stars during a distinguished career - has announced he is to retire.

The 70-year-old, who also trained top horses such as Sinndar, Alamshar and Azamour, said he will not renew his licence next year. 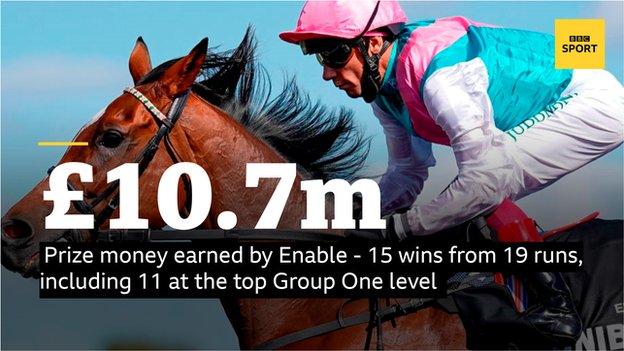 Enable's brilliant career yielded 11 victories at the top Group One level - including two in the Arc, Europe's richest race, in 2017 and 2018.

Her owners Juddmonte, which is headed by Saudi prince Khalid Abdullah, said she would begin a breeding career next year and her first partner will be leading stallion Kingman.

"Enable has retired happy and sound after an extraordinary career," said Gosden.

"Her daily presence has been a joy and her record in Group Ones including four Oaks, three King Georges, two Arcs, an Eclipse and a Breeders' Cup Turf is a marvel and unprecedented."

'Very few can match what she has given to racing'

A potential swansong on British Champions Day at Ascot on Saturday had been mooted, but now a distinguished racing career is over for a horse that won 15 of her 19 races, earning more than £10.7m in prize money.

"She has brought so much joy to everyone who has been involved with her," said Prince Khalid's racing manager Teddy Grimthorpe.

"Her elegance and forceful personality have been nurtured by John and his team at Clarehaven, especially by Imran (groom Shahwani) who has looked after her with such calm and devotion.

"In her, Frankie found a willing partner to execute her ability on the racecourse. Her CV withstands the closest of inspections, very few can match what she has given to racing."

Racing fans will have many happy memories of the talented Enable, who formed an unforgettable bond with jockey Frankie Dettori.

For four years, she proved a winning machine - landing the Oaks in England and Ireland before succeeding in the Breeders' Cup, King George and the Arc.

Unfavourable very soft ground at ParisLongchamp both this year and last undid her bid for another piece of folklore, but she will be remembered as one of flat racing's leading lights.

Life will change fairly quickly, with a date in the breeding shed early next year with Kingman. Her offspring will hopefully take to the track from 2024 onwards.