Stradivarius put in a majestic performance to land a third successive Gold Cup at Royal Ascot.

Frankie Dettori made his move to the front on the 4-5 favourite with two furlongs to go and looked comfortable.

The pair accelerated beautifully away from the rest of the field to win by 10 lengths with Nayef Road (11-1) second and Cross Counter (7-1) third.

Stradivarius joins Sagaro and Yeats in winning the highlight of the Royal meeting three times.

Trainer John Gosden indicated afterwards that matching Yeats' record of four wins from 2006-09 could be a target for next year.

There were concerns that the rain which fell on the Berkshire course on Thursday would not be to the six-year-old's liking with Gosden publicly expressing his worries about the softer conditions.

But those fears proved totally unfounded in an enthralling race as Dettori had his mount well placed throughout for the two miles and four furlongs race with Nayef Road and Withhold setting the pace.

Once they turned for home with four furlongs to go, Dettori and Stradivarius started to loom large and with many of their rivals struggling, a devastating burst of speed meant the race was over in seconds.

Despite the lack of spectators, there was still a good reception for the pair when they returned to the winners' enclosure with Dettori still performing his trademark flying dismount.

"The rain was against him but I was surprised when I looked over my shoulder and everyone was in trouble and he just took off," said Dettori.

"When the ground is like this, often horses struggle so until I pressed the button I wasn't counting my chickens.

"I have ridden some great horses but he is a great stayer and gives people so much joy. He is a character and wears his heart on his sleeve and I am very proud of him."

Elsewhere on the third day at Ascot, Jim Crowley continued his good form with a double to stay top of the jockeys' standings.

Molatham (11-2) gave him a fifth winner of the week when they got the better of Monarch Of Egypt, ridden by Ryan Moore, in the Jersey Stakes.

Although Monarch Of Egypt, trained by Aidan O'Brien, took the lead in the final furlong, Molatham rallied again to win by half a length.

Later, he made it six wins when the 9-2 chance Khaloosy, trained by Roger Varian, ran out a comfortable winner of the Britannia Handicap.

Hayley Turner finished Ladies' Day in style as the 33-1 shot Onassis sprang a surprise to win the Sandringham Stakes for trainer Charlie Fellowes.

Last year, Turner and Fellowes combined for victory in the same race with Thanks Be as Turner became only the second female rider to win at the Royal meeting.

"For us nothing really changes, it's still great to have a Royal Ascot winner whether people are here or not," she said.

"We don't want a female winning at Royal Ascot to be a special event, we want it to be a common occurrence."

American trainer Wesley Ward aims for an 11th Royal Ascot win, with Kimari his big hope in the Commonwealth Cup for three-year-old sprinters. 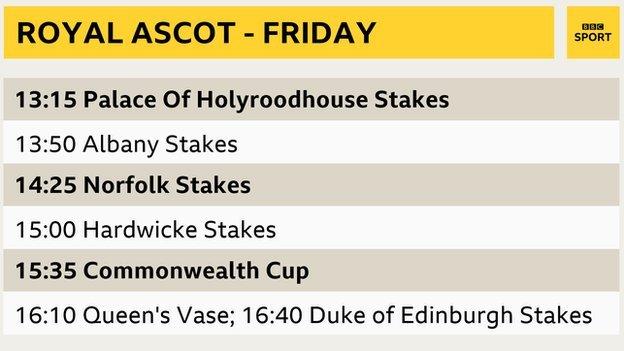