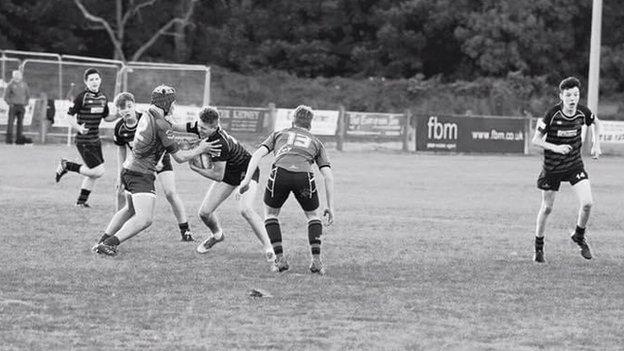 At the age of 16, Lorcan Williams, Ben Jones and Jack Tudor all faced the same big decision - should they pursue a career in rugby or dedicate their lives to racing?

The trio opted for breeches rather than studded boots and although they turned down the chance of potential stardom with the oval ball, they have no regrets.

Williams, Jones and Tudor were childhood friends and remain close, but they are now rivals on the racecourse as three of seven young Welsh jockeys turning heads on the National Hunt scene. It could all have been so different.

"Some days I think: 'My God, I wish I'd gone to the Scarlets and then I ride a winner and I'm glad I didn't'," said Williams.

"I was selected to play for Scarlets West and was supposed to go training with West Wales rugby league, but I was too busy pony racing to turn up!

"Rugby and racing are completely opposite sports - you're trying to get big for one and small for the other. I've always been a big lad and I was really struggling to keep the weight down to race while training for rugby.

"I was so close to choosing rugby. Some people would have grabbed the opportunity to play for Scarlets West and I was so lucky to have it, but the horses just interested me that little bit more."

Jones, also 20, claimed victory in one of British racing's biggest events by taking home The Ladbrokes Trophy - formerly known as The Hennessy Gold Cup - in November. He has ridden an impressive 42 winners this season.

He said: "Lorcan and I had a little bit of a rugby rivalry going on. Every couple of months we'd play against each other in the league and it was always fun.

"I played fly-half for Carmarthen Quins until under-16s and he played full-back for Tenby. Our parents are close and we used to pony race against each other and then play rugby for county as well. That brought us closer again.

"There was a stage when we were in the same boat and just going into county level. The other boys were going to the gym three days a week. Lorcan did weights and put on half a stone, so I was glad I didn't do that.

"There was a decision we had to make between racing and rugby. We were out riding one day and I remember saying to Lorcan: 'What are you thinking?'.

"He said to me: 'For us it's always been horses - we can come back to rugby for fun if racing doesn't work out in the next couple of years'.

"Racing just isn't like that. You've got to do it from a young age, keep working, and hope you get the breaks to make it."

Four years on, Jones and Williams are very much on the right path in their bid to reach racing's top level.

All seven stay in touch on WhatsApp as they bid for stardom in the saddle.

Tudor, who is just 17, rode Potters Corner - a horse co-owned by Wales rugby star Jonathan Davies - to victory in the Welsh Grand National at Chepstow in December.

Prior to the coronavirus pandemic, he had been due to ride in his sport's biggest race - Aintree's Grand National - this weekend.

Potters Corner was a leading contender for the race until it was abandoned.

"It was always rugby or racing for me," Tudor said.

"I played scrum-half for my county at under-16s, but everyone else on the team was getting bigger and they wanted you in the gym. I never grew so it ended up being racing which I enjoyed more."

Tudor continued: "I've been looking forward to the Grand National all year. When I found out it wasn't happening, I was gutted.

"Potters Corner has done everything right and he deserved his chance. Hopefully he will get it next year."

Williams had been due to join Tudor in action in Liverpool this weekend, but they will both have to wait another 12 months for their first Grand National rides.

Still, Tudor does have a chance of success this weekend even with racing on stop.

Potters Corner will take his place in the virtual Grand National on Saturday afternoon with all the money placed on the outcome to be donated to the National Health Service at a time of national crisis.

It might not be the ride he really wanted, but you would not bet against him or any of his friends winning the race one day.

"It'll be a lot easier for me to win the virtual Grand National than the actual one," Tudor said with a smile.