As the Grand National hopefuls are allotted their big-race weights on Tuesday, we meet the trainer and his horse looking to copy the great Red Rum's path to Aintree glory.

Attempting to emulate the legendary Red Rum in the 2020 Grand National is not the sole preserve of two-time winner Tiger Roll.

Just as if Tiger Roll completes a hat-trick of wins, he will equal the Aintree icon's all-time record - achieved in 1973, 1974 and 1977 - so success by Potters Corner would have echoes of the 70s star.

While 'Rummy' was famously prepared by Ginger McCain on the beach at Southport, jockey-turned-trainer Christian Williams puts Potters Corner through his paces on the expanse of sands, and in the waves, adjacent to his base at Ogmore-by-Sea, on the South Wales coast.

"It's a nice thought - Red Rum and us both getting ready for Aintree on the beach," Williams told BBC Sport. "It would be brilliant if the similarity didn't end there.

"I never had a particular plan to train on a beach, but you use what you have, don't you? We also go down through the Ewenny and Ogmore rivers, next to us, to get there, and we've got the largest sand dunes in Europe here to train on as well.

"All the water is great for the horses' legs and we can easily canter in deep sand for 20 or 30 minutes, and the breeze off the ocean means there are no flies."

A Welsh-trained horse has not won the big race at Aintree for more than a century - since Kirkland in 1905.

Potters Corner - owned by a group including Wales and Scarlets centre Jonathan Davies and the All Stars Sports Racing syndicate, managed by former rugby player Gareth Maule - is one of 105 entries for the 4 April race. From that initial list, the top 40 in the weights come the day will line up.

And, Tiger Roll apart, few bring to the party a more striking set of credentials than the 10-year-old - in that he too has already won two Grand Nationals: the Midlands version at Uttoxeter in March 2019 followed, nine months later, by an historic success in Wales' equivalent at Chepstow.

When steered to victory by 17-year-old Wales-born jockey Jack Tudor, the horse became the first 'homegrown' winner of the country's principal horserace since 1965, when the prize was taken by Norther, trained by Denzil Jenkins not far across the Vale of Glamorgan from Ogmore.

The presence of Potters Corner's famous part-owner Davies - with a brace protecting a knee injury sustained at the Rugby World Cup - only added to the sense of occasion.

In contrast, the horse's success in the Uttoxeter feature came when Davies was on the pitch, and winning the Grand Slam with Wales.

That day, television pictures picked out a notably jubilant Davies afterwards, with commentators declaring that his ecstatic face clearly told its own story - but it's said that, actually, he'd just received news of the horse's victory.

Rugby was always sure to play a part in the life of Christian Williams, 37, although his family is horsey - his father Rob trained point-to-pointers for him and brother Nicky to ride, and now runs a successful pony-trekking business, also in Ogmore.

His uncles Gareth and Owen played for nearby Bridgend, while close contemporaries at the town's Brynteg School included players Gavin Henson, Alex Cuthbert, Jonny Hill and Rhys Webb, and the great JPR Williams is also an alumni.

But it was horses and racing that proved the greater attraction and, despite a number of serious injuries, he partnered more than 350 winners, many for champion jumps trainer Paul Nicholls, during a career highlighted by three wins on the mighty Denman and a second place, riding Royal Auclair, in Hedgehunter's 2005 Grand National victory.

Retirement came amid dwindling success during the 2012-13 season because, he said: "I wanted to be the best - I didn't want my parents to say: 'There's my son, he rides five [winners] a year.'"

Initially reluctant to take up training, a spell as a mortgage adviser followed for the father of two young daughters before the lure of preparing racehorses proved too great. He set up elsewhere initially, but then came back to the coastal village of his birth where 35 horses are now under his care.

A reputation for shrewdness was established quickly, as well as a willingness to travel his horses as far as necessary in search of the best opportunities. Fakenham - 270 miles and seven hours' drive away, in Norfolk - has proved a particularly happy hunting ground, and indeed Potters Corner may have his Aintree prep race in France. 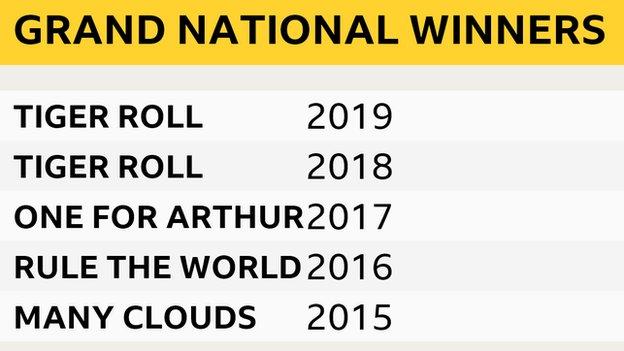 Potters Corner is seventh in the betting for the National.

"I think the course will suit him as he's not an exuberant horse - you can't be too exuberant, using up too much energy - but he's a clever horse and he'll stay [the four and a quarter mile distance] and the sort of [softish] going they usually have will be OK," said Williams.

"He fell twice last year, but I think he's better now; last year, he maybe wasn't really an obvious Aintree horse, but at Chepstow he never missed a beat and was a pleasure to watch."

Never missed a beat; a pleasure to watch - just like Red Rum was in his Aintree days.