"I just think racing was stuck in the dark ages."

So says Hollie Doyle, the 5ft 'pocket rocket' helping lead the charge as women seek to establish their place at the sport's top table.

The 23-year-old set a new benchmark when clocking up her 107th victory of 2019 at Southwell - the most British winners in a year for a woman.

That put her in the top 10 for all British flat riders in a year when Rachael Blackmore was runner-up in the race to be Irish champion jump jockey.

Racing is a rarity in elite sport in having women and men competing against each other on a seemingly level playing field.

But while more than half of the people entering racing schools are women, only 14% of jockeys in Britain are female, says Women In Racing chair Tallulah Lewis.

In 2018 they got 8.2% of the rides but only 1% at the top Group or Grade One level, so the interest is there but something is stopping them reaching the top.

Is it down to ability, resilience or opportunity? The suspicion is that some trainers and owners remain wary of turning to a woman when there are a plethora of men available.

Doyle, along with Hayley Turner and Josephine Gordon - the only other women to have reached the century mark - is helping to change attitudes.

"Given the opportunities, females can compete on equal terms. I just think racing was stuck in the dark ages and was a bit of a man's world but there's enough evidence and results now to show females are just as good as males," says Doyle.

Doyle's target next year is to ride a winner at Group level, but why are more women not getting plum rides in the biggest races?

"I see no reason why in years to come that won't happen. In 10 years we have come on leaps and bounds," says Richard Perham, who rode with Doyle's father Mark and coached her at the British Racing School in Newmarket.

Recognising that more could be done for equal opportunities, the British Horseracing Authority (BHA) set up a 'diversity in racing' steering group in 2017 and is keen to offer women more opportunities.

In the week that Doyle set her new landmark, Bryony Frost was named jump jockey of the year at racing's Derby Awards and Sulekha Varma given responsibility for overseeing the Grand National at Aintree.

The bandwagon isn't for everyone. Frost's award was viewed with scepticism by some, who alluded to tokenism, while others lauded her historic Grade One win over fences at Cheltenham with Frodon.

Even the term 'female jockeys' is a bone of contention - surely they are simply jockeys, say supporters, although the counter point is that highlighting gender and achievements can increase the profile of women in racing.

Choosing your words carefully comes naturally to Tom Marquand, who was fourth in the jockeys' title race this year, regularly rides against Doyle, and is also her boyfriend.

"Hollie doesn't see herself as a female jockey; she's a jockey. That's the attitude which has got her to where she is," says the 21-year-old, a former champion apprentice and shortlisted for the BBC Young Sports Personality of the Year four years ago.

"She is willing to work hard and is extremely focused."

The couple met at a pony racing camp when they were about 14. Her idol at the time was jump jockey Nina Carberry. Now young riders are citing Doyle as their inspiration, says Perham.

"It's amazing to think that people are looking up to me. It only seems like two minutes ago that I was at the racing school trying to become a jockey. It has taken me a while to improve, but I think I have," she says in a typically self-effacing response.

Helped by the backing of trainer Archie Watson and agent Guy Jewell, Doyle has ridden more than 750 times this year and her 14% win percentage is slightly better than her boyfriend's.

"I'm just under 8st and 5ft whereas Tom (5ft 5in) is a bit heavier than me so he does have to sweat [lose weight] daily which makes life tougher for him. I'm just lucky to be as small as I am," says Doyle.

"I've only got one thing on my mind, which is winning. I don't pay attention to what he's doing - half the time I don't even know if he's in the race." 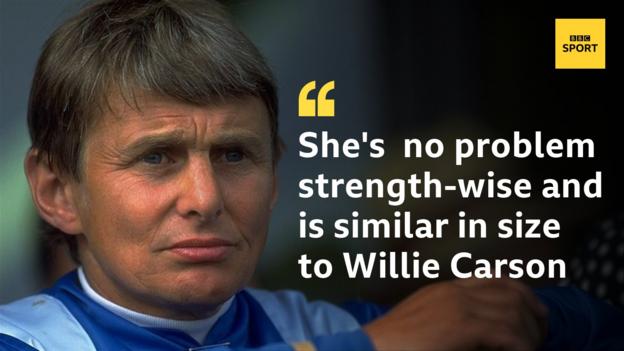 With support from Great British Racing, keen to push this success story, Doyle has been on a whirlwind round of interviews - from BBC Radio 5 live to Sky Sports, who sponsor her.

It is all a far cry from her spell on the sidelines after being kicked under the chin by a horse following a fall at Haydock, when she smashed most of her teeth and accidentally swallowed some of them when she came round.

Doyle had £8,000 worth of dental work at the firm owned by jockey Sam Waley-Cohen, where they X-rayed her jaw, removed four roots and fitted dentures and caps.

She is a regular at Oaksey House near her home in Lambourn, Berkshire, where riders recover from injuries in a state-of-the-art facility provided by the Injured Jockeys' Fund.

"It was an expensive injury, but you are not going to ride horses without risks and that's what I do every day," she says.

"At the start of this year my aim was to just have a clear run of things and I have, touch wood, until now, which has made a hell of a difference."

You suspect that Doyle and Marquand drive each other on, although they insist there is no burning rivalry between them on the track.

"They have an incredible, healthy, energetic, sporting lifestyle, which works well for them," says Perham.

"The new version of riders we are training are all infatuated with fitness. The older generation are fit jockeys but the younger generation are looking at this in a slightly different way."

Doyle's smaller frame means she can afford to put on muscle mass, and she is a prolific weight trainer.

"Being small doesn't make you a great jockey but if you haven't got to worry about your weight, that makes a big difference," adds Perham.

"She was always a lovely confident, neat rider and the perfect size."

Despite a gradual rise in the number of women competing, nearly half of all racehorse trainers did not use a female jockey on any of their runners last year.

Perham says Doyle struggled for a while earlier in her career but thrived after a spell at trainer Richard Hannon's yard.

"There will be people who have doubted her because she wasn't very big and wasn't potentially very strong," he said.

"She would have no problems strength-wise any more and is a very similar size to Willie Carson."

In 2016, Gordon told the BBC that a woman would become champion within 15 years.

"Hopefully it will happen one day. It's very hard to become champion jockey, but you never know," says Doyle.

"I just want to ride as many winners as I can, keep learning and improving. You can never take your foot off the gas because you can easily get forgotten in racing. To take another step forward would be great."