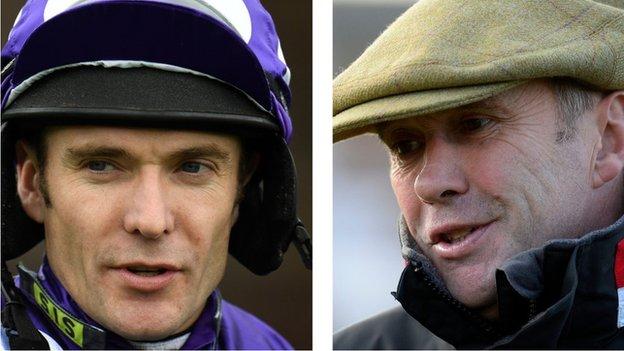 Eight-times champion jockey Peter Scudamore vividly recalls his fluctuating emotions as he cheered on his son, Tom, riding in last year's Grand National, while also shouting for the eventual winner - trained by his partner, Lucinda Russell.

"You can't help it, your family ties are always stronger than anything else" says Peter, who is also assistant trainer to Russell. "Throughout the race, I watched Tom then just after the Canal Turn, Vieux Lion Rouge begins to drop back and Arthur is coming up. Then it was all watching One For Arthur, but a glance back to make sure Tom was getting round safely."

One For Arthur - trained at Milnathort near Kinross in Scotland - became the first Scottish winner of the race since Rubstic in 1979.

Tom Scudamore eventually finished sixth on Vieux Lion Rouge in the world's most famous steeplechase, a race his father famously never won despite his myriad other feats during the 1980s and 90s.

"It was probably the innocence of youth," recalls Tom. "Every year you go up there expecting your dad to win it and every year his hopes got dashed and you just end up coming back crushed."

Peter and Tom are part of a family racing dynasty as Peter's father, Michael, was also a jump jockey who won the Cheltenham Gold Cup in 1957 on Linwell and the Grand National on Oxo two years later.

Father and son got together with BBC Scotland's Geoff Webster to discuss the thrills and spills of jump racing, how they deal with injuries, and why Tom thinks "there has to be something in the blood" for their riding success to continue through three generations.