While football's top players take centre stage at the World Cup in Russia, the world's top thoroughbreds will be strutting their stuff in a corner of Berkshire.

Jockey Frankie Dettori seeks more success, there is a strong overseas challenge and tighter security. Here's a look at some of the main talking points. 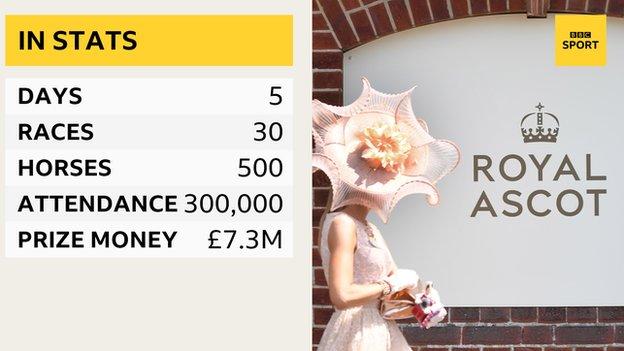 After being forced to miss riding at Royal Ascot 2017 because of a shoulder injury sustained just before the fixture, Frankie Dettori is back with a bang - and looking forward to a gilt-edged book of mounts.

The winner of a record - amongst current jockeys - 56 Royal Ascot prizes since partnering the first, as a 19-year-old in 1990, Dettori says the five days "mean everything" to him.

His notable chances include the unbeaten John Gosden-trained colt Without Parole - bred and owned by John Gunther, breeder of the new US Triple Crown winner Justify - in the St James's Palace Stakes on Tuesday.

Dettori will also partner Gosden's Stradivarius - "a bonny little horse" - in the Gold Cup (Thursday); and in the Diamond Jubilee Stakes (Saturday), Aussie challenger Redkirk Warrior, for whom he was booked in March.

Most interest, however, will be in Cracksman, also trained by the Gosden team and officially the highest-rated horse in Europe, who's been heavily backed to return to his brilliant best in the Prince of Wales's Stakes (Wednesday) after only squeaking home in Epsom's Coronation Cup.

At Ascot in October, the son of Frankel ran away with the Champion Stakes.

"It's obvious to everyone he doesn't like the hills at Epsom," said Dettori. "I hope that 'the beast' turns up, like the Champion Stakes, and we'll have some fun."

The Irish-based Coolmore racing empire is apt to hog the big-race limelight, but during Royal Ascot 2017 it only held off its arch-rival - Sheikh Mohammed's Godolphin operation - by a whisker.

Both enjoyed six successes over the week, with Coolmore leading only after achieving one more second placing (seven) than Godolphin, which itself had six thirds to Coolmore's four.

Although a one-time 'cold war' between the two is over, the rivalry remains intense, and this year Godolphin's powerful squad of Ascot hopefuls arrives after the memorable success of the Charlie Appleby-trained Masar in the Derby at Epsom, with Coolmore no closer than fourth.

However, in Epsom's Oaks, Appleby's Godolphin-owned filly Wild Illusion did have to play second fiddle to Coolmore's winner, Forever Together, but Wild Illusion is well touted to get back to winning ways in the Ribblesdale Stakes (Thursday).

Appleby said: "It's what the sport needs and what we want to see; it's all about competition.

"Sometimes you wonder what you have to do to beat the guys [Coolmore] but the Derby win has given us confidence and will hopefully be a springboard."

That competition will be evident from the word go when Godolphin's Benbatl, trained by Saeed bin Suroor, faces the Aidan O'Brien-trained Rhododendron, for Coolmore, in the opening Queen Anne Stakes.

Throughout the week, an ever-daunting challenge will be jetting in from O'Brien's County Tipperary base; the team, many ridden by top jockey Ryan Moore, is due to be headed by Order Of St George who looks to regain Thursday's Gold Cup, narrowly lost in 2017 in an epic battle with the currently injured Big Orange.

Leading lady and the miracle horse

A prominent position in Royal Ascot's rich history belongs to 2009 as that was the year trainer Wesley Ward won American racing its first Royal Ascot success, two of them in fact.

Of course Ascot - that most traditional of British institutions - has long been a major international event, but convincing US owners and breeders that it could be done was always seen as highly significant.

Ward has added seven more wins to his Ascot tally since then - two of them with the brilliantly-fast Lady Aurelia - and he will be well-represented in what's seen as his specialist area, the races for two-year-olds. Chelsea Cloisters has been getting very favourable mentions as she attempts to become her trainer's fourth Queen Mary Stakes winner (Wednesday).

Amongst the opponents being faced by Lady Aurelia, as she looks for a repeat of her 2017 King's Stand Stakes victory, is fellow transatlantic raider Bucchero, prepared by Tim Glyshaw, an Indiana high school teacher-turned-trainer of 25 horses.

It's fairly remarkable that the six-year-old Bucchero was ever even foaled as his mother, named Meetmeontime, was amongst more than 30 horses found, a foal at her side, emaciated and close to death, on a farm in Florida.

That foal died, but Meetmeontime was nursed back to full health and Bucchero is her second subsequent foal. What a terrific story success would be.

A wonder from Down Under?

The challenge of Aussie speedster Redkirk Warrior, who will be ridden by Frankie Dettori in the Diamond Jubilee Stakes (Saturday) , is all about returning.

The Australians are back at the scene of their great sprint wins with top-notchers Choisir, Takeover Target, Miss Andretti, Scenic Blast and Black Caviar, after having had no runner in 2017.

And although it's not with Winx, the current equine superstar Down Under, the challenge of Redkirk Warrior is extra intriguing because the seven-year-old is British-bred and is returning to a course where he won a mile-and-a-quarter handicap in 2014 when known simply as 'Redkirk' and trained by William Haggas.

The horse was then sold to race in Hong Kong, but problems with his feet curtailed his career there, so he was taken over by David Hayes, who trains in Victoria in partnership with his son Ben and nephew Tom Dabernig.

They have solved the foot issues and reduced the distance of his races, and Redkirk Warrior comes to Ascot off the back of wins in two major Australian sprints, on the second occasion conceding weight to third-placed Merchant Navy, now trained by Aidan O'Brien, and also rated a big Diamond Jubilee hope.

Interestingly, while in the UK, Redkirk Warrior has been occupying exactly the same stable, in Newmarket, as the iconic Black Caviar did when being prepared for her win in the same race in 2012.

Hats off to the Queen?

To date, 23 Royal Ascot races have been won by horses being ridden by a jockey in Her Majesty's silks, the first in 1953, and probably the most famous, 60 years later, when Estimate got the better of a thrilling finish to the historic Gold Cup. No reigning monarch had previously owned the winner.

One possible candidate to be number 24 is the Sir Michael Stoute-trained Elector, who has a number of race-entries; Stoute himself has saddled a record-equalling 75 Royal Ascot winners - the first in 1977 - the same number as Sir Henry Cecil achieved before his death in 2013.

Extra security - and socks in the dress code

After recent incidents of racecourse fighting, including at Ascot, extra security measures are in place, one of which could mean racegoers being breathalysed before entry - and barred - if officials believe they're intoxicated; there will also be more dogs looking to sniff out any drug abuse.

The dress code remains much the same, but it has been stipulated men must wear socks that "should cover the ankle".