He is the winner of most of flat racing's greatest prizes, the Italian with the sparkling personality, sharp dress sense and unmistakeable accent, all of which have made him among the world's most recognisable sporting stars.

And Frankie Dettori, champion jockey, Epsom Derby and Prix de l'Arc de Triomphe hero and A-list celebrity, puts much of his fame and fortune down to a dry and bright Saturday afternoon at Ascot on 28 September 1996.

In a BBC interview to mark the 20th anniversary of that date's unprecedented 'Magnificent Seven' - when he went through the card, taking all seven races that made up the Festival of British Racing, a precursor to British Champions Day - Dettori declares it the outstanding accomplishment of his record-breaking career.

Barely 13 and a half minutes' work, staged over a combined total of less than eight miles, changed his life forever, plus those of thousands of Dettori-following punters who placed accumulator bets on the seven. It left the betting industry in a state of near meltdown. 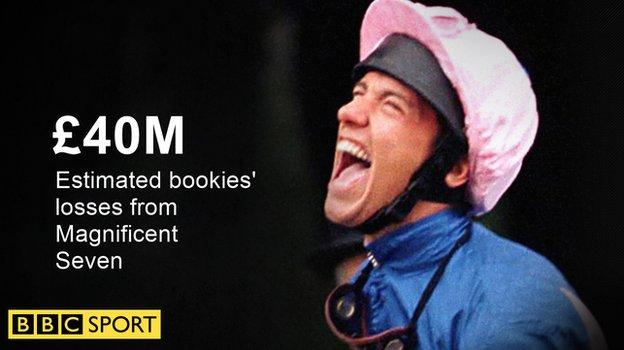 Their combined odds amounted to 25,095-1 (at starting prices), or nearly 236,000-1 for anyone taking advantage of the morning odds on offer.

Speaking to BBC Radio 5 live, the 45-year-old jockey - who in August passed the 3,000 winners mark in Britain - said: "For sporting achievement, it's my greatest thing that I've ever done, and in horse racing. It would be very hard to match something like that.

"And, second, there's a fairytale scenario where bookmakers lost £40m, and wherever I went, in every part of the country, I had so many people coming up to me who'd won so much money on that day, and it changed people's lives, so it's a very amazing thing.

"I moved the stock market [because of fears about bookmakers' losses]. It was crazy what happened, but it's nice that it can happen and people made a lot of money."

Two decades on from the day when the jockey's trademark flying dismount first reached a wider audience, he remembers events "like yesterday… every detail", reeling off the names of the horses involved, and how he was rating their prospects as he left home in Newmarket for the 100-mile journey to Ascot.

"I thought I had a couple of chances on the day," he said. "I thought I'd definitely win the first [on Wall Street] because it was a small field and we'd get a nice, easy lead.

"Diffident [race two] I didn't fancy at all; [2000 Guineas winner] Mark Of Esteem I thought had a great chance in the QEII [featured Queen Elizabeth II Stakes] but had the great filly Bosra Sham to beat; Decorated Hero, my fourth one, had top weight and a bad draw - I couldn't see him winning.

"Fatefully [race five], she had a chance, but it looked a very tricky race and a big field; then came Lochangel in a small field which looked to be a match race between me and Pat [Eddery], so I was pretty hopeful; my last horse, Fujiyama Crest, had won the race the year before with a small weight but was completely out of form and was carrying top weight so I couldn't dream of him winning."

I too have a clear memory of the disbelief that mounted as the successes kept being clocked up, though my recollection is not from the stands or paddock at Ascot, but from a friend's wedding at which many of the guests were followers of a variety of sports.

The groom had been circulating, updating us with bogus football scores - he claimed Dettori's beloved Arsenal, who had just appointed Arsene Wenger as manager, were being beaten by Sunderland, though they actually won 2-0 - and I quickly dismissed his insistence that the then-25-year-old reigning champion jockey had won "another at Ascot" and a few minutes later "another".

The Lochangel success - making it six - equalled a British record held at the time jointly by Sir Gordon Richards (at Chepstow, 1933), Alec Russell (at the now defunct Bogside, 1957) and Willie Carson (Newcastle, 1990), all more 'bog-standard' fixtures compared to Ascot on one of the marquee days of the season.

"After Lochangel, the euphoria came out, and I was delighted," says Dettori. "I sprayed champagne at everyone, it was great.

"Never in a million years did I think I'd win the seventh, but I remember putting my colours on and giving the saddle to Michael Stoute [trainer of Fujiyama Crest] and I said to him: 'Look, I'm on fire, so if this horse gets beat, it's all your fault', and he laughed.

"We went out and got a standing ovation from the public which was very touching, but I was very relaxed and serene because I didn't really believe the horse could win."

However, sent off as 2-1 favourite, having been six times those odds earlier, Fujiyama Crest led all the way and clung on for victory by a neck from Northern Fleet and Eddery, who was runner-up four times during the afternoon.

Dettori believes that the horse - who ultimately spent his retirement with his jockey's family, and only died last year - had a "sixth sense" that something was up and performed beyond his ability.

Ascot was a picture of cheering crowds and long queues in front of ashen-faced bookmakers, some of whom actually went bust as a result of the day's events. For the hero of the hour, there were countless media interviews to perform and thousands of autograph hunters to satisfy before the return home.

"And then I got home and my wife Catherine - she was my fiancée then - dragged me to a friend's birthday party, where I didn't want to go, and so we ended up having a bit of an argument, so it was a bit of a sad end to a great day to be honest with you.

"I got up next morning and opened the door to get the papers, and there were a few cameras outside my house and I was in my underpants - it was one of those Notting Hill embarrassing moments - and only then did I realise this was really headline news."

During the 20 years since, Dettori has continued to make headline news, though not quite on the scale of Ascot. There have been many more big-race winners, of course, and regular TV appearances, on Top Of The Pops and Question of Sport and, more recently, Celebrity Big Brother.

But low moments too: the 2000 plane crash at Newmarket in which pilot Patrick Mackey died; losing his job as number one jockey to Sheikh Mohammed and being written off in some quarters; and a six-month drugs ban for cocaine use.

Dettori, now riding principally for Qatari Sheikh Joaan Al Thani and his Al Shaqab operation, describes himself as "colourful" and his career as a "rollercoaster", and he intends to continue for a few years at least.

"I've achieved everything I wanted to achieve," he said. "Now I'm at a later stage of my career, I'm really trying to enjoy it, and embrace it, as much as I can because I'm not going to be here forever [though] I'll get to 50 riding, no problem,"

And, nearly 30 years on from his initial success in Britain, in June 1987, as an Italian teenager speaking little English, is the enthusiasm still there? The answer is immediate and emphatic: "More than before because I know that I'm running out of time."