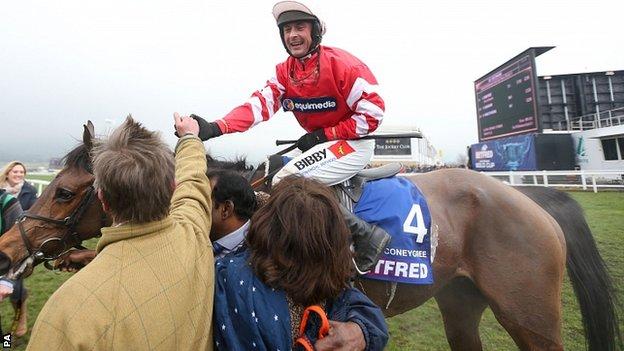 Coneygree held on in a thrilling finish to become the first novice to win the Cheltenham Gold Cup since 1974.

Nico de Boinville guided the 7-1 chance to the front early on and then held off the challenge of Djakadam and Road To Riches in the closing stages.

"It's unbelievable; words can't describe it," De Boinville told BBC Radio 5 live. "He dug deep but I always knew he had enough left."

Favourite Silviniaco Conti threatened at one stage but could not stay in touch when the pace quickened and finished seventh.

"I knew when we got here this morning we were in trouble," said McCoy, who will end his career with two Gold Cup wins.

"He's a horse that likes good ground and for a horse that's slow but has a bit of speed at the end of his race, he doesn't like it when it turns into a drag."

Coneygree becomes the first novice steeplechaser - a horse that has not won over fences before the start of the season - since Captain Christy 41 years ago to win chasing's blue riband prize.

McCoy added: "It was an unbelievable performance from a novice chaser. He got them at it early and stuck at it well."

Coneygree thrived in the soft ground after overnight rain and made most of the running in only his fourth race over fences.

"It was very dependent on the ground," trainer Mark Bradstock told 5 live. "If we hadn't had the rain, he could easily have been a non-runner."

Despite the field closing in on the home straight, the eight-year-old retained the lead up the hill and beat Djakadam by a length and a half, with Road To Riches two lengths back in third and Holywell in fourth.

"I'm numb, it's wonderful," added Bradstock, who has a small stable of about 10 horses in Oxfordshire.

"We've done it before in smaller races and we'll still keep doing it, but it's fantastic to do it on the big stage."

De Boinville, a professional jockey for barely a year, added: "I always knew I could do it, but good horses make good jockeys.

"I'm just so grateful to the owners for keeping the faith, because there are so many big-name jockeys out there who I respect and who could and would have ridden him but they kept the faith in me.

"I'll be eternally grateful to them."