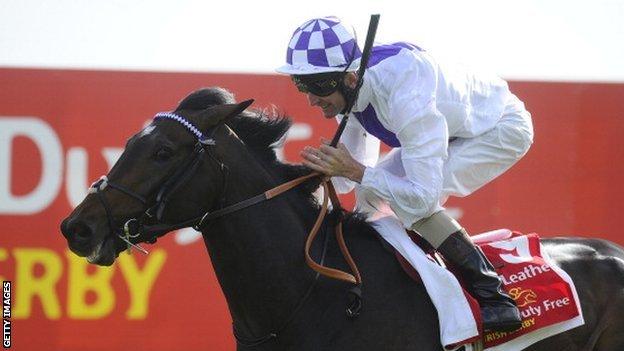 Godolphin's 2013 Irish Derby winner Trading Leather has been put down after suffering a serious leg fracture while running in the Group One Japan Cup.

The four-year old colt was pulled up in the race won by Epiphaneia.

"Trading Leather was much adored and had a tremendous career, the highlight being his Irish Derby win," his trainer Jim Bolger said.

"His passing is tough for us all, especially my staff. This is a very sad loss."

Epiphaneia finished ahead of Just A Way and Spielberg, with the 2012 and 2013 victor Gentildonna fourth under British jockey Ryan Moore.

Godolphin bought a majority stake in Trading Leather at the end of 2013 after the Irish Derby win and the colt started running in its blue silks this year.

The horse finished third in the Group One Irish Champion Stakes at Leopardstown in September behind winner The Grey Gatsby and runner-up Australia.