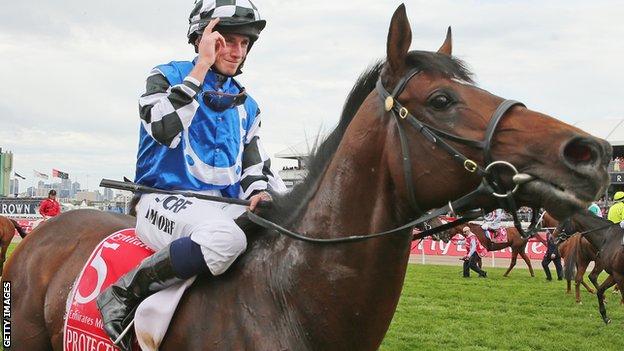 The famously publicity-shy subject could probably barely think of anything much worse than a radio station putting on a 'Ryan Moore Special'.

But that's what BBC Radio 5 live is doing to mark the fact that the 31-year-old's riding skills are receiving ever more rave reviews, all around the globe.

And the increasingly noisy chorus of opinion is that the Brighton-born, three-time champion Flat Jockey of Britain is quite likely the best riding anywhere in the world.

With a series of top level prizes won across Europe and in Dubai, the USA, Canada, Hong Kong and Japan, Moore has for a year or two been the outstanding go-to rider on the international scene.

But in 2014 things have moved forward to an even greater extent with the Aussies, who famously love to hate foreign jockey imports, whatever their reputations, finally falling under Moore's spell.

As though lifting their premier Grade One race, the Cox Plate, with brilliantly daring tactics on Irish colt Adelaide, was not enough, he then ran off with Australia's greatest prize the Melbourne Cup, the race that they say 'stops a nation'.

With a well-timed challenge on the German-trained Protectionist, practically all of Moore's sceptics Down Under were halted firmly in their tracks.

And while no British-trained horse has come closer than second in 'the Cup' - Red Cadeaux filled that spot for the third time in 2014 - at last the Pommies could at least claim the winning rider.

Being hard-working, single-minded, ice-cool under pressure and tactically brilliant is what makes Ryan Moore so special. And the horses under him seem to want to do what he asks.

But Moore, son of Sussex-based trainer Gary and his wife Jayne, and brother of jockeys Jamie, Hayley and Josh, is no Frankie Dettori, much more Lester Piggott.

Leaping from the saddle with big grins and extravagant turns of phrase for the cameras are not his thing at all.

OK, there were smiles aplenty in Melbourne, but they are - as he himself might acknowledge - a rarity.

As a result, his relationship with the racing media is at best fairly business-like and at worse hostile; that said you do get the impression nowadays that perhaps he's getting to quite enjoy living up to the stern caricature created around him.

As part of 5 live's programme, brother Jamie, regular rider of champion two-mile chaser Sire De Grugy, trained by their father Gary, tells the BBC: "Ryan could have everyone in the world hating him, and he still wouldn't care less, and that's why I think he's does so well because nothing fazes him.

"He doesn't care what people think of him as you guys [in the media] probably well know. And he doesn't understand why people need to think he's doing anything special.

"He doesn't want to be a celebrity."

It's been a truly magnificent year, with the promise of many more to come, and many more air miles.

AP McCoy has joined us to pay tribute to Moore, and I imagine he won't be the only person saying nice things. Your comments are very welcome below.

The man himself would doubtless find it all very embarrassing, so maybe it's just as well he's fulfilling a contract in Japan at the moment so might not hear.

Though there is always the podcast.

You can listen to BBC Radio 5 live Racing's Ryan Moore special from 22:00 GMT on Monday, 17 November.