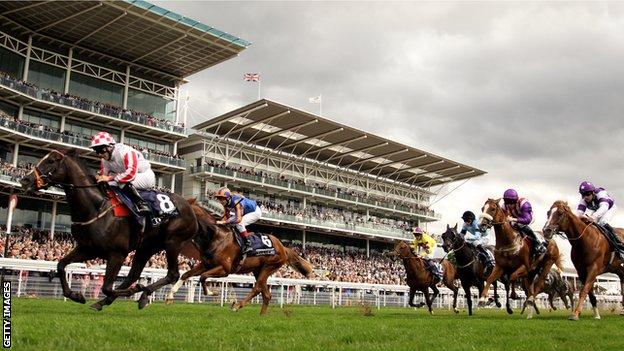 Not everybody calls York's Ebor Festival 'the Royal Ascot of the North'; some more exuberant members of the North of England and Scottish circuit have been known to declare Ascot 'the Ebor of the South'.

The answer is, of course, somewhere in between.

Both are bright and much-anticipated beacons during the Flat racing season, supplying the finest of stages for some of the sport's very biggest names.

In 2005, however, when Royal Ascot needed a temporary home during building works, the north/south banter became reality as Yorkshire staged the event with a similar kind of sporting gusto it employed for the visiting Tour De France this summer.

This year the four-day (20-23 August), Welcome To Yorkshire-backed Ebor Festival is all set to play its part in the shaping of the season, as an increasingly established crop of three-year-olds seeks to further enhance the reputation of the Classic generation of 2014.

Whereas the position of Ascot, two and a bit weeks after Epsom in mid-June, meant the Royal meeting didn't host either of Epsom's Classic winners - Australia (Derby) and Taghrooda (Oaks) - officials at York's historic Knavesmire track are delighted to be getting both.

The regally-bred three-year-old Australia, winner subsequently of the Irish Derby, and Taghrooda, the unbeaten filly who graduated spectacularly from the Oaks to beat older and male opponents in the King George, make Group One visits.

Lining up, respectively, in the first-day feature, the Juddmonte International, and the following afternoon's Darley Yorkshire Oaks, they avoid each other for now, but hopes are high the star pair might go nostril to nostril in October's Prix de l'Arc de Triomphe.

Comfortable victories are predicted for both, though in opposition to the Aidan O'Brien-trained Australia, who faces rivals older than three for the first time, are the horses that lifted the Eclipse Stakes (Mukhadram, aged five) and King George 2nd (Telescope, aged four).

Yorkshire-trained French Derby winner The Grey Gatsby is also due to take part.

O'Brien has expressed some concern about the fitness of his Coolmore-owned colt, who drops back in distance to race over a mile and a quarter, but considering his belief that the horse is the best he has had, it's probably just diplomatic caution.

The trainer's jockey son Joseph has slimmed down to his lowest weight in two years to take the mount.

Mention above of The Grey Gatsby, also the winner of York's springtime feature, the Dante Stakes, reminds us there's a noticeably strong local contingent of which he's at the head.

That defence also includes the likeable Clever Cookie, a definite player against well-backed Pallasator in the historic Ebor on the final day; The Wow Signal, attempting to follow up his recent Royal Ascot win in the Irish Thoroughbred Marketing Gimcrack Stakes, also on Saturday; and Hartnell who's up against Derby runner-up Kingston Hill in the Neptune Investment Great Voltigeur Stakes (Wednesday).

When Flat racing comes to nominate a trainer of the year, John Gosden, the champion presumptive, will receive most nominations for the successes of Taghrooda, Kingman and The Fugue, amongst others.

But Co. Meath-based Eddie Lynam will not be a million miles behind after Royal Ascot wins with top sprinter Slade Power, and also Sole Power and the two-year-old Anthem Alexander (from just four runners).

'Sole', owned like his near-namesake by the Power bookmaking family, and Anthem Alexander, winner of Ascot's Queen Mary Stakes, are scheduled to face each other and a string of other speedy individuals in the Coolmore Nunthorpe Stakes, the Friday feature.

For Anthem Alexander, the downside is that it will be only her fourth start, but the big plus is that the weight-for-age rules give her a potentially telling advantage of nearly two stone - think of that in terms of bags of sugar - as she attempts to emulate winning juveniles Kingsgate Native (2007) and Lyric Fantasy (1992).

All in all, from Anthem Alexander to Australia and Taghrooda to The Wow Signal, it's a line-up of which any racing festival could be proud, whether staged north or south, or indeed east or west.