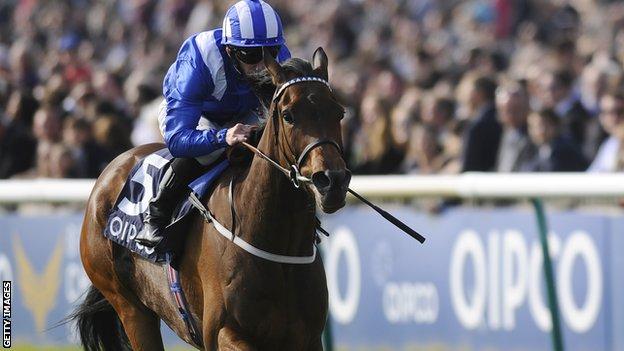 Two-time champion jockey Paul Hanagan claimed his first Classic as he rode Taghrooda to a brilliant victory in the Oaks at Epsom.

The 5-1 chance, trained in Newmarket by John Gosden, swept to the front for a convincing triumph by three and three-quarter lengths.

"It went like clockwork. I'd been planning it like that for about a month in my head," said winning jockey Hanagan.

Long-time leader Volume (9-1) was third as favourite Marvellous, the Irish 1,000 Guineas winner, finished down the field and was unable to complete a fillies' Classic double for trainer Aidan O'Brien.

Taghrooda, a daughter of 2009 Derby winner Sea The Stars, provided a third Oaks success for owner Al Maktoum, who scored with Salsabil (1990) and Eswarah (2005).

The mile-and-a half race was run in memory of the 10-time champion trainer Sir Henry Cecil, who died in June of last year. He saddled the winner of the Oaks eight times.

A sun-drenched Ladies' Day saw the ground dry out to be officially described as Good, with a bumper crowd revelling in temperatures approaching 25C.

Hanagan, 33, was riding in the race for the first time, and it was a first victory in the fillies' Classic, at the 10th attempt, for Gosden.

The Liverpool FC-supporting rider, who was born in Warrington, Cheshire, was flat racing's champion jockey in 2010 and 2011.

Richard Hills, former long-standing retained rider to Al Maktoum and now part of the backroom staff, said Taghrooda's victory was a "big lift" for his family after the recent death of his brother John.

The Lambourn-based trainer died on Sunday, aged 53, after a short battle against illness.

"John will be watching," said Richard. "He said to me last week, 'Rich, good luck' and there's no doubt he was there with us."