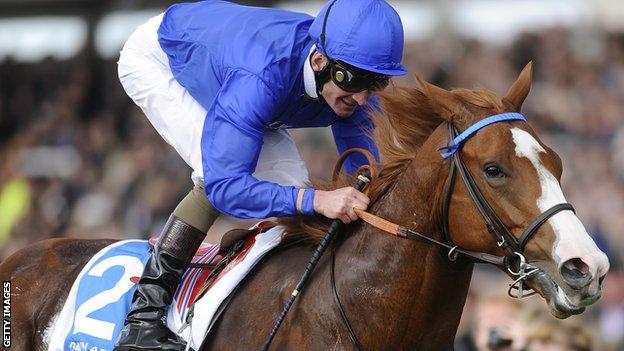 Kevin Manning will ride Godolphin's Sudden Wonder in Saturday's Derby at Epsom as further jockey bookings were finalised on Tuesday.

The Irish jockey, who won the 2008 Derby on New Approach, replaces Mickael Barzalona.

Apprentice jockey Oisin Murphy, 18, will have his first Derby ride after being booked for Red Galileo.

"Oisin Murphy is probably the brightest young riding talent to hit Flat racing since Frankie Dettori in the 1980s, though, to be fair, Murphy's emergence has been even more meteoric.

"For a teenager to be offered mounts in both the Derby and the Coronation Cup, two of racing's greatest prizes, barely a year after riding in his first race is simply astonishing.

"Funnily enough, during a visit to Murphy's employer, Andrew Balding, in April, the trainer observed to me that his apprentice was so good that "he could easily get a ride in the Derby, you know".

"I have spoken to connections and we agreed that we would like Kevin Manning to be on board as his style of riding will suit Sudden Wonder," Appleby said.

"He is a very positive rider and experienced around Epsom. He partnered New Approach, Sudden Wonder's sire, to victory in the Derby."

"We had a list of possible jockeys and after watching him win the Temple Stakes, the decision was made to book Oisin," said Dunlop.

Murphy will also ride William Knight-trained Beacon Lady in the Coronation Cup on the day.