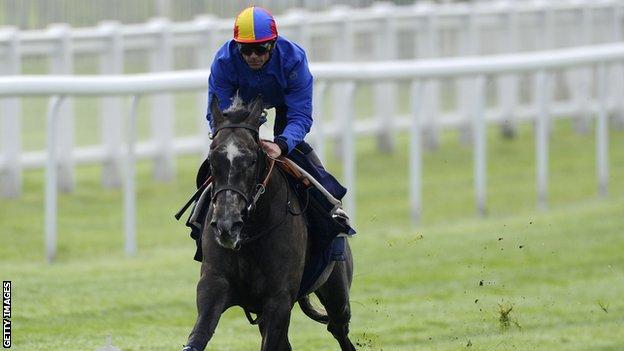 Trainer Ed Dunlop hopes Amazing Maria can lead a revival for his virus-hit Newmarket stable if she goes in the Oaks next week.

The three-year-old was one of a number of horses laid low by an illness in April which set back Dunlop's start to the season.

"We're way off the pace. A lot of horses haven't run this year," he said.

"It's like the start of the season. We'll catch up. We're pleased to be over it and hope they keep healthy."

Amazing Maria, rated at 25-1 for the Oaks, has not ran since winning the Group Three Whiteley Clinic Prestige Stakes at Goodwood in August, her second success from four outings.

The Sir Robert Ogden-owned filly has been entered into the 12-furlong Classic at Epsom on 6 June, with Frankie Detorri riding.

"This filly is class. She won a group race impressively as a two-year old," said Dunlop, who has won the Oaks previously with Snow Fairy and Ouija Board.

"Everyone has forgotten about her because she hasn't been seen for some time. If it keeps raining it won't do her any harm."

Dunlop hopes that a win and two runners-up finishes this week is a sign that the illness that ran through his yard has subsided.

"It's been a month since it first materialised. Some of the lesser lights started to run very badly and sadly were found to have bugs with dirty throats," he said.

"We don't know what caused it. But thankfully we had a winner so we know the horses are better."