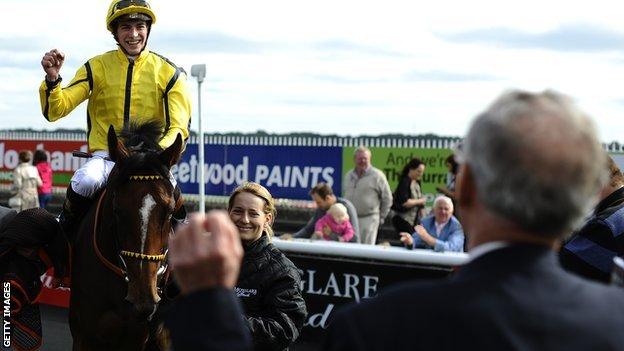 Rizeena will miss the Irish 1,000 Guineas at the Curragh on Sunday after suffering a nose bleed.

Clive Brittain's filly is denied a run in the Irish Classic after a setback at home in Newmarket on Thursday morning.

Brittain said: "It's heartbreaking, but it's what the game is all about - you have your good days and your bad days."

Rizeena won the Queen Mary at Royal Ascot last year, but finished out of the placings in the 1,000 Guineas at Newmarket earlier this month.

"She'd done all her major work six days ago and was only having a blowout, but we found a bit of blood coming out of her near-side nostril," added Brittain.

"It was only a trickle but if there is in any doubt we always take them out.

"It could be something over nothing, but you can't take any risks.

"The filly is still bright-eyed and alert. I don't think we've a sick animal on our hands."

Rizeena won the Group One Moyglare Stud Stakes on her last visit to the Curragh, but only finished seventh behind Miss France on her seasonal bow in the Newmarket Guineas.