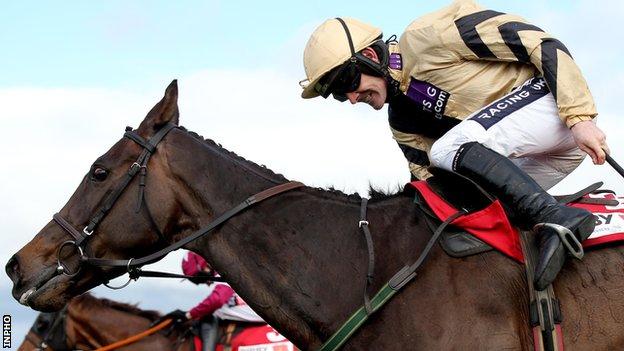 Boston Bob, ridden by Ruby Walsh and trained by Willie Mullins, lay second after a shaky landing at the last.

But the nine-year-old, sixth in the Ryanair at Cheltenham, produced the strongest finish to prevail having been sent off the 5-2 favourite.

First Lieutenant travelled well in his first run in blinkers to finish second.

Paul Townend partnered the Mullins-trained On His Own, whom Walsh snubbed in favour of Boston Bob, but the Cheltenham Gold Cup runner-up faded tamely out of contention.

"I was going to ride On His Own but Willie convinced me to ride Boston Bob and I am glad I listened," said jockey Walsh.

Boston Bob travelled notably well throughout, with Walsh seemingly keen to play his cards as late as possible.

He was slightly awkward on landing at the final fence, but soon regained his momentum and was well on top at the line, scoring by three and a quarter lengths.

First Lieutenant ran a superb race in second, with the application of headgear clearly having the desired effect.

Last year's runner-up Long Run bounced back from his fall in the Grand National at Aintree with a decent effort in third, finishing just ahead of fellow British hopeful Medermit.