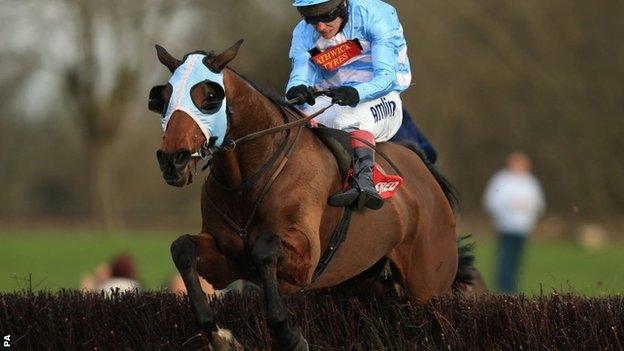 Goulanes stayed on stronger than Alpha Victor while West End Rocker, who had made a bold bid from the front, hung on for third with Summery Justice fourth.

Jockey Richard Johnson said: "He was good and jumped well bar the third last. It's been a great week."

Johnson, who won two races at the Cheltenham Festival, was on board in place of Tom Scudamore, who was switched to Kempton at the last minute.

"They went a really hard gallop early on, the ground is drying but it's tacky and hard work," Johnson continued.

"Tom Scudamore said to humour him a bit but he jumped the last well.

"He's a bit of a character but he's got ability. When he got to the front, he was looking at everything."

Owner Roger Brookhouse, who won the Arkle at Cheltenham with the Pipe-trained Western Warhorse, added: "The ground was drying up at Cheltenham so we decided to come here.

"As long as it was soft enough we thought he had a good chance."