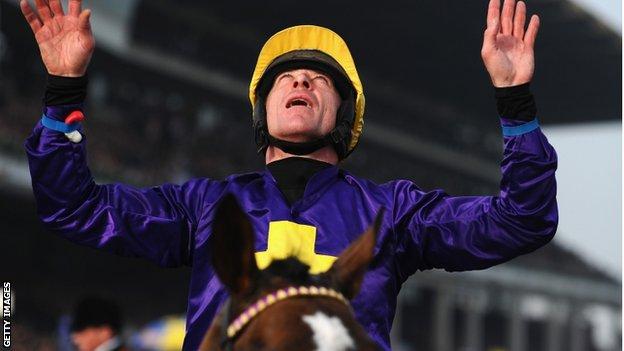 Lord Windermere, ridden by Davy Russell, won a thrilling Cheltenham Gold Cup at 20-1 by edging On His Own in a photo-finish.

The Giant Bolster was third while favourite Bobs Worth ended up in fifth.

The result stood after a stewards' enquiry ruled Lord Windermere did not interfere with On His Own.

It means Jim Culloty has now won the race as trainer as well as jockey. He rode Best Mate to three consecutive Gold Cup wins ten years ago.

"I cannot believe it," he said. "Halfway round I was going to sack the jockey! He's not moved a muscle and he's come from nowhere. It's a dream - I'll wake up a in minute."

"People are still assessing how this year's Gold Cup goes down in terms of quality, but in terms of drama it was simply extraordinary.

"As though the string of earlier spills, which left several jockeys in hospital, plus two big-race false starts weren't enough, Lord Windermere appeared from practically nowhere to grab the spoils very, very late.

"A lengthy stewards' inquiry at Hexham on a Tuesday is tense enough, but after argy-bargy towards the end of the ultimate race of the jumps season it is virtually unbearable.

"Some said it hung in the balance for those long minutes, but others that it would take a brave set of officials to change such an important result, and it wasn't changed.

"Now, the planning to bring Lord Windermere back in 2015 to defend his crown will begin. It's hard, as members of the Bobs Worth team (5th) found out, and they also know it's even harder to regain after loss. Only Kauto Star has ever done that."

The finish was one of the closest in Gold Cup history as Lord Windermere, On His Own and The Giant Bolster all burst for the line accompanied by second favourite Silviniaco Conti who eventually claimed fourth.

Bobs Worth was bidding to become the first horse since Best Mate in 2004 to win consecutive Gold Cups but never really got going despite being heavily backed by punters into 6-4.

Controversial horse Last Instalment was allowed to run despite a drugs inquiry into trainer Philip Fenton. But he fell towards the end of the contest and owner Michael O'Leary confirmed afterwards he would be retired with a leg injury.

Lord Windermere beat his rival by half a neck but was not declared victorious until 15 minutes later after stewards deliberated in the weighing room.

Jockey David Casey, who was later banned for seven days for overuse of the whip onboard On His Own, claimed he suffered interference from winner Lord Windermere veering into his path, telling the inquiry he would have won with a straight run.

Russell responded by saying: "Without doubt, I am on the best horse in the race and I am never going to be passed the whole way."

Stewards' secretary Paul Barton acknowledged there was minor interference, but "on balance" did not think this had cost the runner-up victory although Russell was suspended for one day for careless riding.

On His Own's team later refused to rule out an appeal into the decision.

It has been a remarkable turnaround for Russell, who lost his retainer with Michael O'Leary's Gigginstown House Stud operation in January.

"I'm obviously delighted and relieved," he said after the result was announced. "It was nerve-wracking. I knew I was under no pressure and I just took a chance of going down the inside and he's done it. All credit to the horse. We've not had a run like this from him all year."

Bobs Worth's poor jumping was the reason many punters ended up disappointed, according to his jockey Barry Geraghty.

"I was outpaced most of the way, and he didn't jump as well as he could," he said. "He ran as well he could though. It suited good ground horses and I think Bobs Worth lacked the gears. The best horse won on the day."

It was the standout win of an incredible day for 34-year-old Russell, from County Cork, who surprisingly won two other races on Friday to finish level on three wins for the Festival with Ruby Walsh, Barry Geraghty and Tom Scudamore.

Russell won the JCB Triumph Hurdle on board Tiger Roll at 12-1, in a race where Walsh broke his arm, after only riding the horse because original jockey Bryan Cooper broke his leg earlier this week.

He then went on to round off the Festival onboard 16-1 Savello in the Grand Annual Handicap Chase.