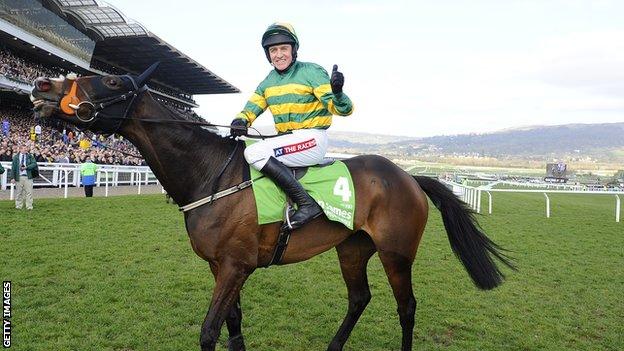 Jezki edged out My Tent Or Yours to win the Champion Hurdle at Cheltenham with The New One third after being halted by the fatal fall of Our Conor.

The 9-1 winner, ridden by Barry Geraghty for Irish trainer Jessica Harrington, won by a neck with favourite Hurricane Fly denied a third title as he finished in fourth place.

Geraghty urged his mount home to beat champion jockey AP McCoy on the shorter-priced My Tent Or Yours (3-1) in a 1-2 for owner JP McManus.

Ruby Walsh on Our Conor, talking to BBC Radio 5 live

"It's very unfortunate what happened to Our Conor but Our Conor is still a horse. He's an animal. What happened here last year with John Thomas McNamara made your heart sink - he has a wife, three kids. That made my heart sink. Jason Maguire yesterday, he's got a wife and she is expecting and last night he was fighting for his life. That is heart-breaking. Our Conor has no family, he's a horse, it's sad, but it has to be kept a little bit - in my eyes - in reality. He lives outside your back door, he doesn't live inside it."

Our Conor fell on the far side of the track and, after lengthy treatment, the decision was taken to put down the five-year-old because of a back injury sustained in the fall.

The gelding, trained by Dessie Hughes in Ireland, was a 15-length winner of the Triumph Hurdle at last year's Festival.

After that win he was bought by owner Barry Connell, who pledged any prize money won this season by the horse, runner-up in the 2014 Irish Champion Hurdle, to a fund in aid of jockey JT McNamara, who was paralysed after a fall at the meeting last year.

Jockey Danny Mullins was in tears after the fall, which cast a shadow over what had been billed as the race of the week.

"He was attended by vets immediately and they did everything possible to save him," said a British Horseracing Authority spokesman.

"After extensive treatment for a back injury, the decision was made to humanely put down the horse."

Hurricane Fly was bidding to emulate fellow top Irish hurdler Istabraq, who completed his treble in 2000, by claiming a Champion Hurdle hat-trick.

The 10-year-old, trained by Willie Mullins, was sent off the 11-4 favourite and travelled well for much of the race but was overtaken by younger rivals up the Cheltenham hill.

Jezki, aged six, had been well placed near the lead throughout as Our Conor and Captain Cee Bee set a brisk early pace in the two-mile contest.

But the race changed as Our Conor crashed to the ground, and almost brought The New One to a complete halt.

Jockey Sam Twiston-Davies, riding for his trainer father Nigel, managed to regain his stride but lost too much ground to triumph.

He stayed on for third as Jezki and My Tent Or Yours battled for victory, and the horse which McCoy had rejected the chance to ride took the win.

10,745 - Bottles of house Champagne sold at The Festival

8,000 - The number of sticky toffee puddings eaten during the fixture

Harrington was not surprised by his decision, saying: "AP has been beaten twice this season on Jezki, so why would he ride him? You need luck in running and maybe I had the gods smiling on me today."

It was a 29th Festival winner for Geraghty but only a second Champion Hurdle after he rode Nicky Henderson's Punjabi to victory in 2009, while Harrington claimed her first Champion Hurdle title as a trainer.

"I have been riding winners for Jessie since I was 17 or 18 and she has been great to me over the years. She has given me plenty of good horses like Moscow Flyer," said Geraghty.

"It's brilliant to be back here for her again. The Champion Hurdle is one of the races in the year that you want to win. I had a great run around - he missed the third last, which was the only slight concern I had, but apart from that he was very good.

"He found plenty when I needed him to. The runner-up was getting to me - I needed the line."