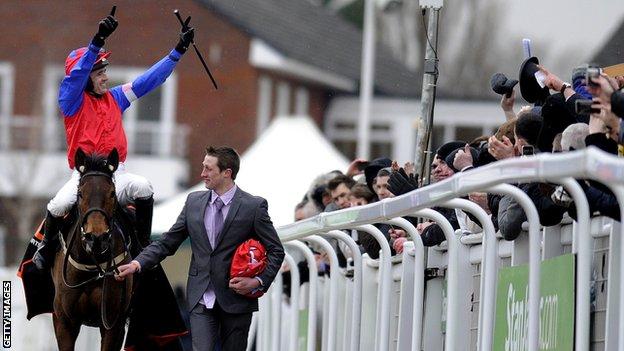 Quevega will try to rewrite the Cheltenham Festival record books on Tuesday when she goes for a sixth consecutive OLBG Mares' Hurdle victory.

The 10-year-old equalled Golden Miller, who won five Gold Cups in a row between 1932 and 1936, when Ruby Walsh guided her to victory last year.

Quevega, trained in Ireland by Willie Mullins, heads a 16-strong field and is likely to go off as hot favourite.

Her rivals include French contender Sirene D'Ainay, who led at the final hurdle last year before being overtaken by Quevega on the run-in.

Cockney Sparrow, with 18-time champion jockey AP McCoy on board, is another leading challenger in the Grade Two contest.

The John Quinn-trained prospect is one of only three five-year-olds entered for the race which features mares aged four or over.

French-bred Quevega has run only twice in each of the last four years - at the Cheltenham and Punchestown festivals - but has won every time.

The mare, whose last defeat came in May 2009 on very soft ground at Auteuil in France, makes her seasonal debut on Tuesday.

Walsh, 34, is the Cheltenham Festival's all-time leading rider with 38 career victories - including the five on Quevega from 2009-2013.

Mullins, who also runs Glens Melody in the mares' race, is happy with Quevega's preparation.

"We've followed the same training regime every year and it's worked out fantastically," said the eight-time champion Irish trainer, 57.

"To me, reading those old books about Cheltenham and Golden Miller winning five Gold Cups in a row, personally as a trainer I find it as satisfying as anything to be able to produce a horse to go back there every year. I enjoy that part of it as well.

"She has the ability and that's key. We mind that ability and produce it on the days that count."

Walsh and Mullins have a big opening day at the Festival, with Quevega's stablemate Hurricane Fly seeking a third Champion Hurdle victory in the preceding race.