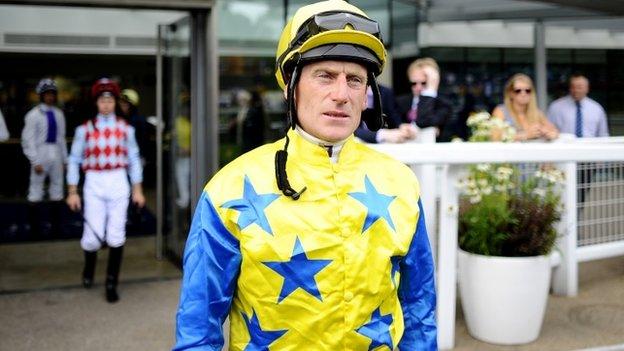 Top Irish jockey Johnny Murtagh has announced he is to retire from riding to concentrate on his training career.

"The training side of things is getting bigger all the time and I wasn't happy giving the riding 50% and the training 50%," said Murtagh.

"It's the right time to call it a day and put everything into the training."

Murtagh rode more than 100 Group One winners and his last victory in a major race was aboard Royal Diamond on Champions Day.

He won the Derby at Epsom three times in six years - with Sinndar (2000), High Chaparral (2002) and Motivator (2005) - and claimed the leading rider award at Royal Ascot for a fifth time last year.

Murtagh's other British Classic victory came with a brilliant front-running ride aboard 2011 Oaks scorer Dancing Rain, while he rode Yeats to two of his record-breaking four Gold Cup victories.

"I've done extremely well and when you look at the list of horses I've ridden, there have been some brilliant horses," said Murtagh.

"It would be unfair to pick out one, but there were a number of special days.

"My first Derby win aboard Sinndar was obviously a huge thing and then Yeats was an incredible horse to be associated with.

"I suppose winning on Sole Power in the King's Stand last year was massive for me as well. Just the way the race went and getting up on the line - you know when you get it right.

"Riding and training Royal Diamond to win on Champions Day last year at Ascot (in the Long Distance Cup). That was something very special as well."

He added: "I didn't ride a horse until I was 15 and it's been fantastic, but it's now time to move on to the next chapter in my life."

"When Johnny Murtagh became top jockey at Royal Ascot for the fifth time in June, seeing off a long list of mainly younger rivals, there was almost a feeling that the enduring 43-year-old might go on forever. But the full-on life as a trainer, which he began in 2013 and combined with race-riding last season, was always going to force his retirement at some point.

Today he hangs up his boots as one of the outstanding and, crucially, one of the most inspirational riders of his generation. Outstanding because of the string of successes all around the world, notably the brilliant Epsom Derby, Irish Derby, Arc treble with Sinndar in 2000. Inspirational because he battled against and saw off alcohol and weight demons to reach and stay at the top."

Murtagh took out his training licence in May 2013 and took over the reins from Tommy Carmody at Fox Covert Stables in County Kildare.

He is now aiming for the same sort of success on the training front as he enjoyed in the saddle.

"We have 45 horses in training at the moment, including 20 two-year-olds and we have a few new owners," said Murtagh, who battled alcohol problems earlier in his career.

"I have the same expectations as when I was riding - the standards are still the same.

"If we get a bit of luck and a good horse comes along, we'll get there."

Friend and rival Frankie Dettori was among his former weighing room colleagues to pay tribute.

"Johnny is probably one of the best judges of pace I've ever come across and one of the most hard working and talented jockeys I've ever ridden against," said the three-time champion.

Murtagh was stable jockey to champion Irish trainer Aidan O'Brien between 2008 and 2010, and partnered such equine talents as Henrythenavigator, Duke Of Marmalade, Dylan Thomas and Yeats.

"Johnny was a wonderful rider and we had great years together when he rode for us," said O'Brien.

"He will be a great trainer and we would like to wish him, Orla (Murtagh's wife) and all the family every success in the future."