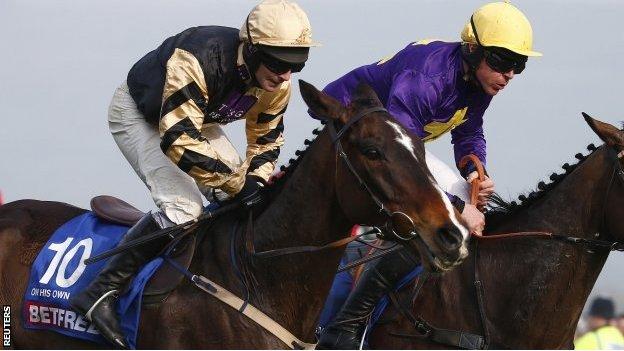 Cheltenham Gold Cup runner-up On His Own and last year's favourite Seabass have been officially scratched from next month's Grand National.

On His Own, trained by Willie Mullins, will be aimed at the Punchestown Gold Cup.

Seabass, third in the National two years ago, finished fifth of five runners at Down Royal on Monday.

A total of 73 entries remain in the 5 April race at Aintree, with a maximum of 40 lining up.

Allocation of weights is a pivotal moment for trainers, jockeys, owners and punters.

Unlike the Cheltenham Gold Cup Cup, where horses race off level weights, the Grand National is a handicap.

Horses are ranked according to their previous form, with the best given top weight.

The handicapper's ultimate (although in practice unfeasible) aim is for the horses to pass the winning post in a dead heat.

The closest finish came in 2012 when Neptune Collonges denied Sunnyhillboy by the shortest possible distance - a nose.

Chief Handicapper Paul Smith said: "On His Own is disappointing after his fantastic run at Cheltenham last week.

"He would have technically been 10lbs well in and it would have been fascinating to see if he could replicate the Gold Cup performance here.

"But clearly they got to the bottom of him there and a three week turnaround is a bit of a short turnaround."

Seabass, trained by Ted Walsh and which gave his daughter, jockey Katie Walsh, a highest placed finish for a female jockey in 2012, started favourite last year but finished 13th.

Teaforthree, eighth in Friday's Gold Cup, is favourite for the Aintree marathon with bookmakers.

If, as expected, the race remains over-subscribed, the lowest-rated horses will be balloted out.

Trainer Paul Nicholls revealed Sam Twiston-Davies is "highly likely" to ride top weight Tidal Bay as the 13-year-old bids to become the oldest winner of the race since Sergeant Murphy in 1923. The veteran steeplechaser has been allocated 11st 10lb.

After Tuesday's scratching of horses, Nicholls has four left in contention, with three withdrawn.

The Grand National is a handicap chase, run over nearly four-and-a-half miles, with different weights given to runners based on previous form.

Another Nicky Henderson-trained challenger, Newbury Hennessy winner Triolo D'Alene, is 1lb lower along with Roi Du Mee, one of 39 Irish entries and a representative for Gordon Elliott, the last Ireland-based trainer to win the race with Silver Birch in 2007.

Compatriot Mullins, who saddled Hedghunter to land the 2005 National, has the highest number of hopefuls at this stage.

Tidal Bay, runner-up in Sunday's Irish Hennessy Gold Cup and third in the Welsh National, seeks to become the first top weight to triumph since the legendary Red Rum's record third win in 1977.

Rocky Creek is sixth on the weights list at 11st 5lb, with Kauto Stone - the half-brother of record-breaking chaser Kauto Star - 4lb lower and Welsh National second Hawkes Point on a handy mark of 10st 6lb.

Last year's 66-1 winner Auroras Encore has been retired, and runner-up Cappa Bleu is out through injury, but third-placed Teaforthree is set to carry 10st 12lb.

Among favourites with the bookmakers this time is the 2012 Welsh National winner Monbeg Dude (about 20-1), part-owned by former England rugby union captain Mike Tindall and ex-Wales fly-half Nicky Robinson.

Welsh National winner Mountainous and recent Doncaster winner The Rainbow Hunter are on 10st 7lb, and should make the cut.

A record prize fund of £1m is on offer this year, with the Merseyside marathon sponsored by alcoholic ginger beer maker Crabbie's.

Officials hope there will once again be no serious injuries in the National after all runners came home safely in 2013 when a more flexible fence structure was introduced following two equine fatalities in each of the previous two runnings.