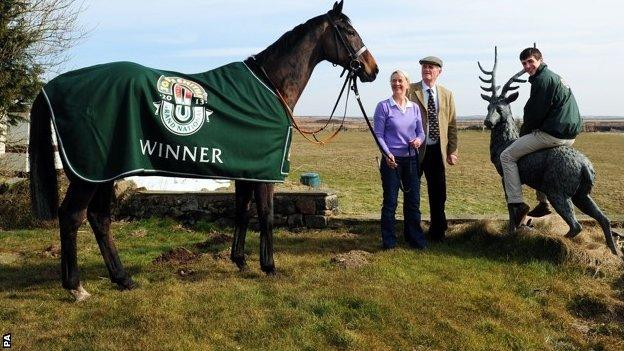 Auroras Encore, the 66-1 winner of the 2013 Grand National at Aintree, has been retired after fracturing a leg.

The 12-year-old, trained by Sue and Harvey Smith, sustained the injury while finishing last in the Skybet Chase at Doncaster on Saturday.

"It's a great pity that injury has forced the retirement of Auroras Encore, but what a highly favourable place the horse, his owners, the Smiths and Ryan Mania occupy in Grand National history.

"The race badly needed good news last April after two years in which the deaths of horses and welfare issues dogged it to such an extent many feared for its future.

"And that's what Team Auroras Encore provided: a good, clean, old-fashioned Aintree fairytale, from a part-owner who'd once listened to Aintree plots as a bellboy at Liverpool's Adelphi Hotel to the one and only Harvey Smith, to a young, articulate jockey - the first from Scotland to win in nearly 120 years - and all wrapped up in odds of 66-1. Perfect."

It was announced that he would not race again after having screws inserted during an operation on Tuesday,

"These things happen. I just want him home to have a happy retirement," Sue Smith told the Yorkshire Post.

She added: "They got him up successfully after the surgery and he was staying overnight in the operating box. Fingers crossed - it's still early days.

"He won a National for us. It doesn't get bigger than that. He doesn't owe us anything. This is a racing injury and I'm afraid that it is what you have to expect from the job on occasion.

"We have to expect these things and that's all there is to it. I just want him back to his retirement."

Ridden by Ryan Mania, Auroras Encore won by nine lengths in last year's Grand National at Aintree and was between a 20-1 and 33-1 shot to retain his crown.

Auroras Encore was the first Yorkshire-trained winner of the National since Gerry Scott's Merryman II, trained by Neville Crump, triumphed in 1960.