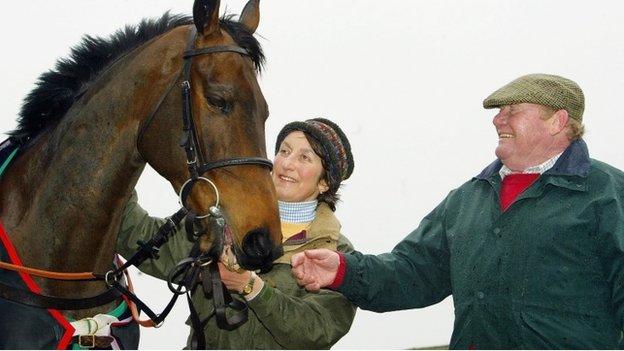 "Very sad news that former champion jockey and the legend that was Terry Biddlecombe has passed away. Thoughts with 'Hen' and his family. RIP," said McCoy on Twitter.

"Terry Biddlecombe was a hero of mine ever since I discovered the champion jockey and my family shared the same doctor in north west Gloucestershire.

"I used to make up medical ailments in the hope of bumping into the most charismatic of sportspeople, with his mass of blond hair and highly-successful, never-say-die style in the saddle.

"After retiring as a jockey, he drifted about for a time before meeting and marrying Henrietta Knight, and playing a major part in masterminding the glittering career of Best Mate.

"They were nicknamed 'the odd couple'- Biddlecombe with his Gloucestershire accent and often fruity vocabulary, Knight the rather prim and proper ex-girls' schoolteacher - but it worked brilliantly."

The news was confirmed on Knight's Facebook page with a notification reading: "Sadly, Terry died peacefully after breakfast this morning with Henrietta by his side."

Biddlecombe, one of jump racing's best-known characters, won the jockeys' title in 1965, 1966 and shared the honours with Bob Davies in 1969.

"After the season finished we went on holiday together and had a great time," recalled Davies.

Biddlecombe won the Gold Cup aboard Woodland Venture in 1967 and went close to winning the Grand National when Gay Trip was second in 1972.

The former alcoholic and ex-school teacher Knight might have seemed like an odd couple, but they achieved great success after marrying in 1995 with horses such as Edredon Bleu, Lord Noelie and Impek.

Knight quit training in May 2012 to help look after her husband and the horses in her care moved on to Mick Channon, where she still plays an active part in the training of the jumpers.

"Racing lost a true icon today. Others lost a friend, husband and father who made life full of fun. Terry Biddlecombe was a star," said Channon.