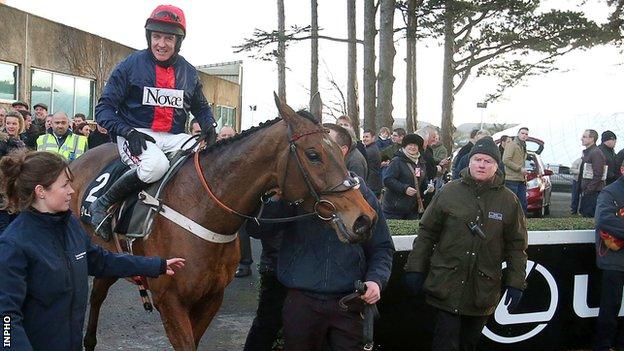 Trained by Nicky Henderson and ridden by Barry Geraghty, the eight-year-old stayer saw off First Lieutenant and Rubi Ball in the final straight.

It was the perfect response from Bobs Worth after being beaten out of sight on his seasonal reappearance in the Betfair Chase at Haydock last month.

First Lieutenant had jumped the last in the lead but Bobs Worth came through.

With four fences to jump, there were a handful of contenders queuing up in behind to challenge the Ruby Walsh-ridden Rubi Ball, with First Lieutenant putting in a couple of excellent leaps to put himself on terms with the leader.

However, Geraghty switched Bobs Worth to the outside turning for home and he found plenty on the run to the last.

He continued to dig deep all the way to the line and his length-and-half triumph puts Bobs Worth right back into the Betfred Cheltenham Gold Cup reckoning.

Betvictor and Paddy Power both made him the 5-2 favourite to retain his title.

Earlier, Geraghy had given Dysios (8-1) a patient ride to get the better of Leah Claire in the Christmas Hurdle.

There were several with chances between the final two flights, but nothing was going better than the Denis Cullen-trained Dysios, who battled on stoutly on the dash to the line to win by two lengths from Leah Claire.

Ruby Walsh was on board all three, guiding Sure Reef home in the opening Maiden Hurdle and also the 11-8 favourite Djakadam in the Beginners Chase.

Sandwiched in between was Zaidpour who stormed home to land the Grade One Christmas Hurdle at odds of 5-4.