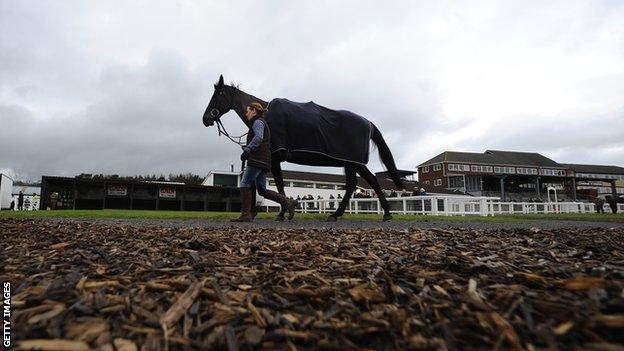 Big Buck's took an important step towards his return with a gallop before racing at Exeter.

The champion staying hurdler, trained by Paul Nicholls, was partnered by Daryl Jacob for the two-mile workout.

The 10-year-old is unbeaten in his last 18 races, but has been out with a leg injury since winning the Long Distance Hurdle at Newbury last December.

"It was exactly what he needed. Paul wanted him to have a nice day out and he's had that," said Jacob.

Big Buck's travelled alongside Finale Hurdle-bound stablemate Solar Impulse, ridden by Nick Scholfield, around the course before going ahead near the winning line.

He has been back cantering since October and is pencilled in for a return in the Cleeve Hurdle at Cheltenham in January before bidding for a fifth Ladbrokes World Hurdle triumph at the Cheltenham Festival.

"I've had him pretty fit as he has done lots of preparatory work, it was just a matter of getting him back on to a racecourse and that was his first bit on grass," said Nicholls.

"There will be another gallop, either here or at Wincanton, before he runs in the Cleeve."