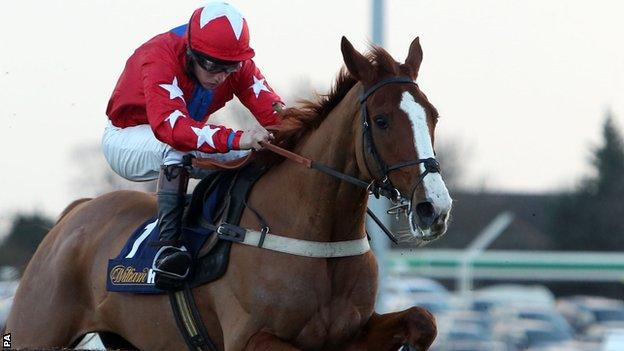 Jamie Moore rode the 4-1 winner home at Kempton after the odds-on favourite, ridden by Barry Geraghty, failed to finish in his first outing since April.

Sprinter Sacre's growing number of fans will take comfort from the fact that another of jump racing's modern-day greats, Denman, also suffered from an irregular heartbeat. Denman's treatment and subsequent recovery was so successful that he was later a courageous runner-up in no less than three Cheltenham Gold Cups.

However, Nicky Henderson - crowned champion trainer for the first time in over a quarter of a century last season - will also be reflecting on the fact that Sprinter Sacre's defeat is symptomatic of how the defence of his title is going.

Whereas during the last campaign, everything Henderson touched seemed to turn to gold, this time there have been all sorts of reversals: this, the defeat of Gold Cup winner Bobs Worth at Haydock and another stable star, Simonsig, out for the season through injury.

But, he's been around long enough to know that these things happen in racing, and it's very likely the string will back on track soon.

The seven-year-old, previously unbeaten in 10 steeplechases, withdrew around the halfway point of the two-mile race.

"They (the vets) listened to him when he pulled him up, and there is an irregular heartbeat there," said trainer Nicky Henderson.

Earlier this month, Sprinter Sacre withdrew from the Tingle Creek Chase at Sandown, also won by Sire De Grugy, through injury and had not raced since winning the Champion Chase at Punchestown in April.

Geraghty had written in his At The Races blog that his mount was "flying" in the build up to the Grade Two race, but after looking uncomfortable early on the jockey pulled him up.

Henderson added: "He is going to have to go for dope tests and then they will scope him and hopefully we will know more later."

Winning owner Gary Moore, father of the victorious jockey, said the circumstances took some of the gloss off the win.

He said: "I'm over the moon for the horse and the owners, and especially Jamie. It's just a shame he had to do it that way but it's not his fault the other horse has gone wrong.

"I can enjoy it, but it has probably taken a bit of gloss off. If ever we were going to take Sprinter Sacre on, today was going to be the day."