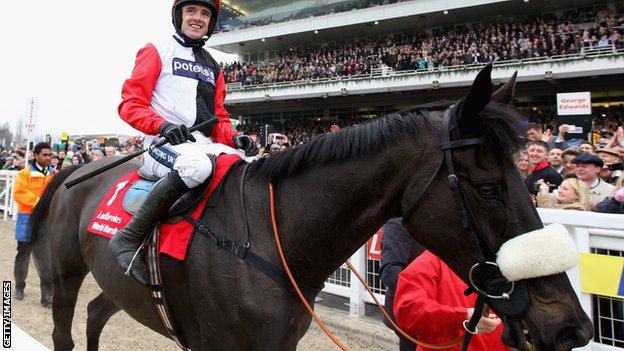 Champion staying hurdler Big Buck's is set for a racecourse gallop before racing at Exeter on Thursday.

The Paul Nicholls-trained 10-year-old is continuing his recovery from injury.

Big Buck's has been out of action since taking his winning streak over the small obstacles to 18 with a runaway victory in the Long Distance Hurdle at Newbury nearly 13 months ago.

The four-time World Hurdle winner is expected to return to competitive action in January at Cheltenham.

Owner Andy Stewart is hoping to run his horse in the Cleeve Hurdle and will give him a run at 12.15 GMT on Thursday.

Big Buck's will be looking to regain the World Hurdle title at next year's Cheltenham Festival in March after missing the 2013 race through injury.