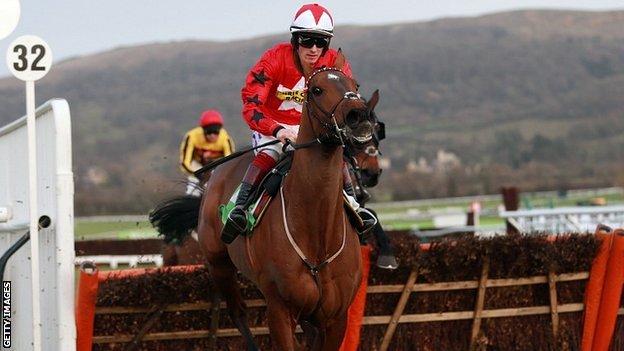 The New One reinforced his Champion Hurdle credentials with an impressive victory over Zarkandar in the International Hurdle at Cheltenham.

The Nigel Twiston-Davies-trained five-year-old, who took the Neptune novices' hurdle at Cheltenham last March, won by six lengths as the 2-5 favourite.

Zarkandar, ridden by Daryl Jacob and trained by Paul Nicholls, made much of the running in the feature Group Two contest but clashed with Jumps Road on the run to the last.

The New One was left in front, but put in a poor final jump as Zarkandar fought back gamely before Twiston-Davies' mount surged clear at the finish.

"I missed the last, but he has so much boot underneath him that I gave him a kick in the belly and off he went," said Twiston-Davies Jr.

"I am a bit annoyed with myself, as I said one thing I wouldn't do was hit the front before the last, but the horse is very good."

The trainer said: "It's different class, having the boy on board makes it extra special.

"What I loved was when the other horse got to him he quickened away - that was Champion Hurdle-type acceleration.

"He'll have the entry for the Christmas Hurdle and as long as he is 100% he will go, as there's so few races for him."

The stewards ruled Jumps Road's jockey Brendan Powell was at fault for the incident with Zarkandar, and suspended him for three days for careless riding.

Jacob said of Zarkandar: "It (interference) has obviously put him off his stride a bit, but in regard to the winner there was no way I'd have got him anyway."