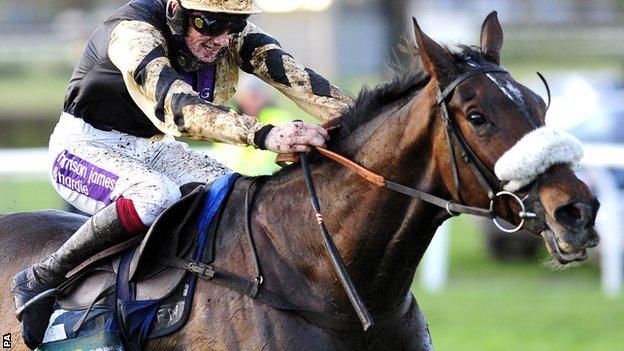 Veteran steeplechaser Tidal Bay could be given the chance of one more big-race win in the Welsh National.

Trainer Paul Nicholls says the 12-year-old, rated a 20-1 chance, would be competitive as the official handicapper has dropped his rating by 8lb.

He also reports record-breaking hurdler Big Buck's to be on course for a return from injury at Cheltenham next month.

But his Hennessy Gold Cup runner-up Rocky Creek will not run over the Christmas period after a minor setback.

Paul Nicholls on his new team

"The new riding team is doing well. We made a whole heap of changes and it's come together earlier than I ever thought it would," he said.

"Basically he's had a bad bout of constipation. He's not been right and definitely isn't going to run in the Lexus [Leopardstown] or the Welsh National [Chepstow, both 28 December]," said Nicholls.

Nicholls said there were several early options for Rocky Creek in 2014 including Cheltenham in late January, the Irish Hennessy or the Aon Chase at Newbury.

"We haven't made our mind up which route to go down - Gold Cup or Grand National. If we're going for the National it might not be the worst thing to have had a little setback and be patient with him," he said.

Last year's Lexus Chase winner Tidal Bay has the Irish race as an option again, but Nicholls favours a run at Chepstow.

"The handicapper dropped him 8lb the other day, which has given him half a chance in the Welsh National," said the seven-times champion trainer.

"If the ground was very testing at Leopardstown, you'd have a look at it but I'm quite sweet on the Welsh National for him because I think it would suit his style of running. He loves to be dropped out last and creep into it."

Tidal Bay, winner of the 2008 Arkle Chase at the Cheltenham Festival, has been rejuvenated after switching to Nicholls from the now-retired Howard Johnson.

The horse disappointed when fifth in the Betfair Chase at Haydock in November, but Nicholls feels the track did not suit him.

If Tidal Bay misses Leopardstown, the Somerset trainer is likely to send Unioniste over for a race he has won three times in the last six years.

Nicholls was speaking at a lunch to promote Kempton's two-day Christmas meeting, which features the King George VI Chase on day one, Boxing Day.

He believes his two contenders, Al Ferof and Silviniaco Conti, stand good chances, with Cue Card and Dynaste nominated as their main dangers.

"I always thought Al Ferof was made for this while Silviniaco Conti would have been in with a chance in the Cheltenham Gold Cup if he hadn't fallen. I wouldn't split them," said Nicholls

While Silvianico Conti will be aimed at the Gold Cup in March, Al Ferof - owned by John Hales - may go for the shorter Ryanair Chase.

"John would like to go for the Gold Cup but he might just have an outsider with one who won on Saturday in Unioniste, if he keeps improving," added Nicholls.

"I could easily see Al Ferof switching to the Ryanair. I said to John the Ryanair might suit him this year and the Gold Cup next year. The next few months will tell us what will happen."

Meanwhile, four-time World Hurdle winner Big Buck's is on course to run on 25 January in the Cleeve Hurdle at Cheltenham, where he will seek a 19th consecutive win.

"He looks fab and will be bang on to run, touch wood," said Nicholls.

Stablemate Zarkandar, who runs in the International Hurdle at Cheltenham on Saturday, may not be aimed at the three-mile World Hurdle.

"He doesn't look to me as a stayer waiting to happen, the way he ran at Ascot the other day. I think he's probably two, two and a half, one day we will try him over further," added Nicholls.